In categories:  How ToEssential Primers 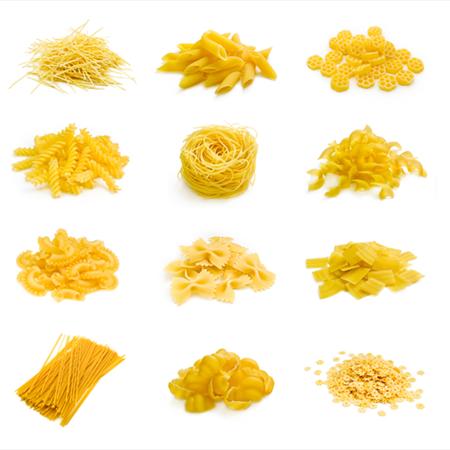 Choosing the Right Pasta Shape for Your Dish

Pasta served in restaurants can quite often taste better than what you cook at home – and it nearly always looks better. But why?

You can credit fine china, alluring lighting, or fresh basil garnish, but often, it comes down to simply better-matching the shape of the pasta to the dish being served.  Although pasta is typically made from a simple flour-water-egg recipe and tastes pretty much the same regardless of shape, different forms work better with various sauces and ingredients, which significantly affect the flavor and feel of pasta dishes.

A simple rule of thumb some cooks use is the lighter the sauce, the thinner the pasta. This basic theory works when you’re cooking only three types of pasta such as angel hair, spaghetti and elbow macaroni, which, based on their size and shape, go well with garlic and olive oil, meat sauce, and cheese sauce respectively. But with over 40 types of pasta shapes available, perfectly pairing them with sauces is more challenging.

One of the pastas most commonly served by home cooks, the most popular round strands include spaghetti, vermicelli, and cappellini (commonly known as "angel hair" in the US), all of which need sauces thin enough to lightly lubricate but not drench them. Spaghetti pasta is available in thin, medium, and thick strands. Medium strands are often labeled vermicelli and the skinniest ones are called angel hair or cappellini. Long, flat, medium-size strands include fettuccine, taglitelle, and linguine. Thicker round strands are good partners for medium-viscosity sauces such as marinara or spaghetti sauce, while the flat varieties pair well with Alfredo and basil-pesto sauces. Skinny strands require a light sauce like garlic and olive oil or puttanesca that won’t weigh them down and overshadow their flavor and bite.

Bucatini and perciatelli are long and round like spaghetti but have hollow centers. When tossed with medium-thick sauces, the flavors run through the center of the strands as well as coat the outsides, giving you a double-dip of sauce in every bite. The sturdiness of this pasta type also makes it good for pasta carbonara as well as an ingredient in Asian soups and stir-fry dishes.

Elbow macaroni, the curvy pipe-shaped pasta we all depend on to make macaroni and cheese so pleasing, is the most commonly served tubular pasta, although other short, hollow shapes are gaining popularity. Shapes such as penne, rigatoni, and ziti have straight tubes with blunt or slant cut ends that nicely catch bits of meat, sauce, and vegetables. If you choose tubes with ridged exteriors, they cling to even more sauce. Tubular pasta is perfect for casserole dishes such as baked ziti as well as pasta salads as it is sturdy and has a chewy texture that works well with chunks of food cut in similar size pieces. Large pasta shells and manicotti tubes are often filled with meat and cheese mixtures and topped with sauce before baking.

Whimsically shaped pastas add character to the plate as well as catch the essence of sauces and topping ingredients in all their crevices and crannies. They are perfect bases for pasta salads and simple side dishes as they aren’t as heavy as dishes made with tube pasta. Corkscrew pastas include rotini, fusilli, and cavatappi are popular choices for pesto and light meat sauces. Other well-liked short shapes include bells, shells, bowties, butterflies, and gemelli, which is two short pieces of short strand pasta twisted together. Kids find rotelle, shaped like little wheels, and radiatori, which look like tiny radiators, fun to eat in casseroles and soups.

Filled or stuffed pasta is typically made from fresh egg pasta dough shaped into squares (ravioli), round or half-moon cake shapes (tortellini), or little hats called cappelletti. Stuffings range from cheese to ground meat or seafood. Filled pasta is usually served with a simple cream sauce or light broth to let the flavors and textures of the fillings take center stage.

Although most often used in soups, orzo, couscous, and tiny pasta shaped like numbers and alphabet letters is also good as a side dish when cooked in broth, drained, and mixed with fresh vegetables. For an extra light pasta salad, use tiny pasta instead of shaped or short, tubular pasta.

No matter what type of pasta you serve, there are a few tips that will turn out perfect pasta time after time.