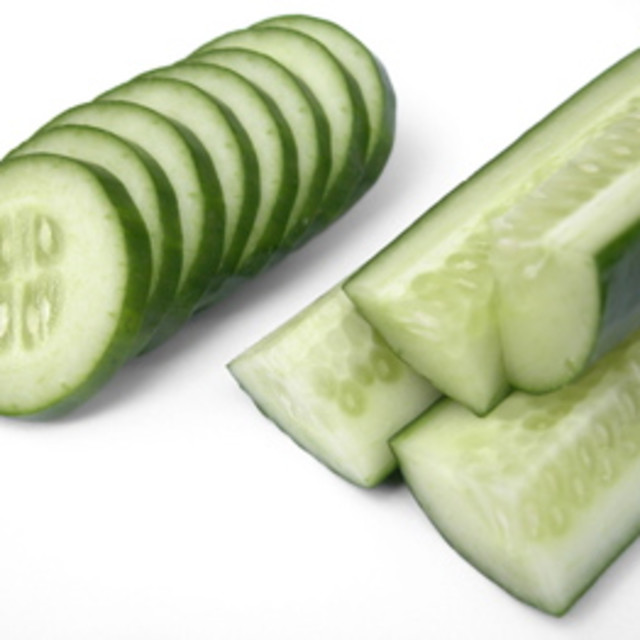 Usually found in fresh salads, vegetable trays and cold soups like gazpacho, cucumbers are long, cylinder-shaped vegetables of the gourd family. They have thin, dark green skins and a refreshingly mild and crisp inner flesh with seeds. Smaller cucumber varieties are used to make pickles.

Though cucumbers are usually associated with hot weather, they were forced to grow out of season for the Roman emperor Tiberius, who reigned from 14-37 A.D. The Romans so enjoyed cucumbers that he demanded they be available every day of the year. He ate 10 a day himself.

There are more than 40 varieties of cucumbers that belong to three main types. Most commonly found at supermarkets, slicing cucumbers usually have dark green, heavily waxed skins. (The wax is added to seal in moisture and extend shelf life.) Popular varieties include the Ashley, Marketer and Palomar.

Sometimes called Kirby or West Indian Gherkin, pickling cucumbers are short and very crisp, with bumpy skins. They are most often used for pickles.

The more expensive English (or hothouse) cucumbers are long, thin and virtually seedless, which makes them less bitter. They are marketed in shrink-wrapped plastic.

Choose firm cucumbers with brightly colored skins. They should be well-shaped, but not too large—smaller cucumbers tend to be less bitter. Avoid cucumbers with shriveled ends, soft spots or a dull or yellowed color.

Store whole, unwashed cucumbers in a plastic bag in the refrigerator for up to one week.

Wash cucumbers right before using. Then taste the skin. If it's heavily waxed, thick or bitter-tasting, peel it. The thinner skins on English, locally grown or garden cucumbers don't usually require peeling unless you want to for aesthetic reasons.

You may also wish to remove the seeds, which are often bitter. To seed a cucumber, cut in half lengthwise, then run a spoon or melon baller down the center to scrape the seeds away.