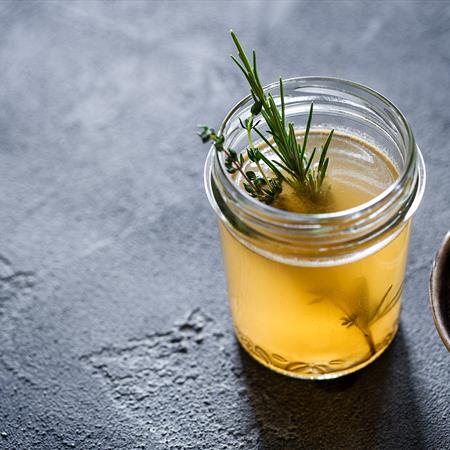 If chicken soup is for the soul, then bone broth is for the gut and a strong immune system. A flavorful concoction of meat, aromatics, and liquid comes together to form the perfect comforting elixir in this Instant Pot bone broth recipe. 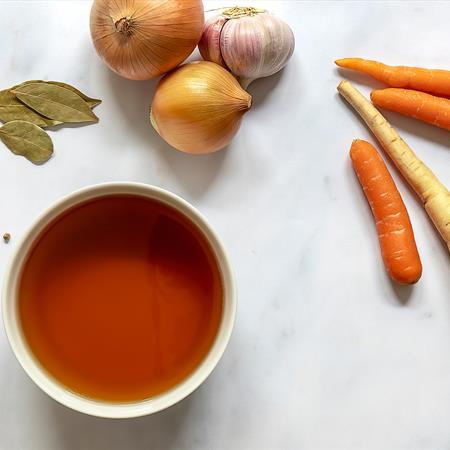 Using an Instant Pot to prepare your bone broth makes it quicker and easier than ever to make a time-consuming dish such as this. It really is a one-pot wonder that you can set and forget. The Instant Pot does all the heavy lifting and you’re left with the tasty result. 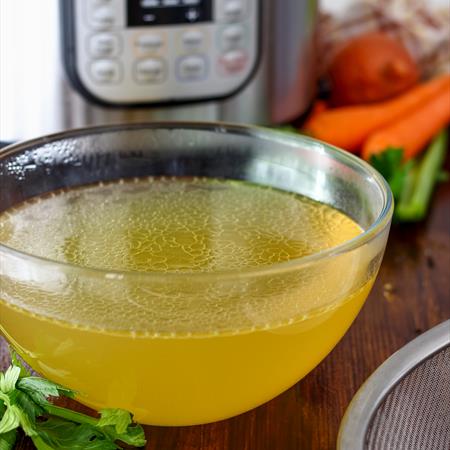 The Instant Pot is truly a versatile appliance. It’s a pressure cooker, a new way to bake a cake, a slow cooker, and everything else in between. For this bone broth recipe, the Instant Pot’s pressure cooking power comes in handy. It’s still able to produce a full-bodied and flavorful product but in a fraction of the time it would take using the conventional stovetop method.

When you’re making something as simple as bone broth with very few ingredients, it’s important that those ingredients be as high quality as possible. Organic veggies and meat will contribute to a wholesome and high-quality broth in the end. The cuts of meat that tend to be the most flavorful come from more mature animals. In this case, if you’re making chicken bone broth, a stewing hen would yield the most flavor. Our recipe also calls for apple cider vinegar. The main purpose of vinegar is to help pull out any minerals and nutrients that are in the bones.

The combination of carrots, celery, and onion, also known as mirepoix, is part of the array of aromatics used to enhance the overall flavor and fragrance of the broth.  The other components adding incredible flavor are the mixture of bay leaves, peppercorns, thyme, and parsley. To save yourself time straining all these ingredients from the finished bone broth tie them up with butcher’s twine in cheesecloth. In French, this is referred to as a sachet d'épices. This will act in the same way a teabag does to permeate the broth with incredible flavor. 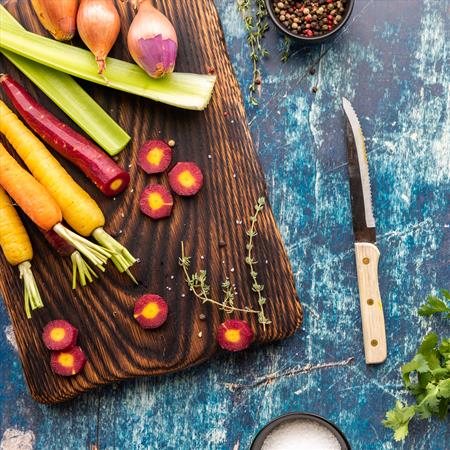 At the end of the day, the key components of a bone broth really come down to odds and ends. The best way to collect all of these cuttings is over time. Sure, you can go to the store and purchase everything all at once, but we prefer collecting leftover bones and vegetable trimmings in an ever-growing bag in our freezer. It’s a great way to ensure nothing goes to waste, and then, once you’ve gathered enough scraps, you’ll be able to have an infinite supply of bone broth ingredients ready at a moment’s notice.

The technique for making stocks and broths is actually indistinguishable. The true difference between the two comes down to stock being made from simmering bones, and broth from simmering meat. Bone broth is a hybrid of the two and, in our opinion, gives the best of both worlds. 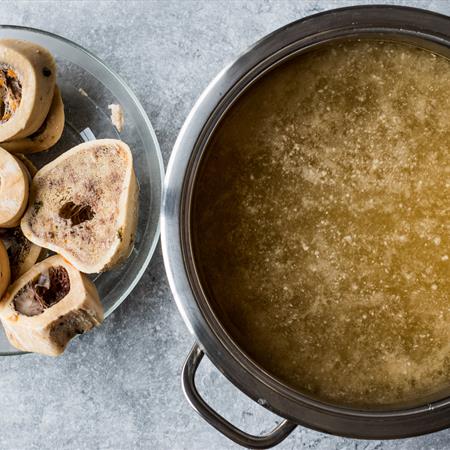 Stocks and broths are thought of as the foundation of cooking. In fact, when many young culinarians are just starting out, one of the very first things they learn to make in culinary school are stocks and broths. This is because so many other things can be made from them, specifically soups, stews, and countless sauces. So this Instant Pot bone broth isn’t just great for sipping on, it’s truly the perfect blank slate for creating a culinary masterpiece. If you really want to get creative with your cooking and add a whole other depth of flavor to certain dishes, you can even swap out water for this decadent bone broth to cook your pasta, rice, and vegetables.

When time is up, allow the Instant Pot to release pressure naturally. This can take upwards of 20 minutes. Before removing the lid, release any residual pressure by manually toggling the vent valve. Carefully remove the insert and allow the broth to cool until you are safely able to strain it. If you choose to make the sachet d'épices you can easily remove that as well as any other large pieces with tongs to avoid any splashing during the straining process. Once the bone broth has cooled, pour it into storage containers and refrigerate for up to 5 days, or freeze for up to 3 months for later use.

Since this recipe is fool-proof, it’s basically a no-recipe recipe that leaves so much room for adaptation. For example, you could roast the meat, bones, and mirepoix before adding them to the Instant Pot. This would change the flavor profile completely and give it a deeper, richer color and taste. You could also consider changing some of the aromatics and adding in ginger, turmeric, and lemongrass to produce a completely different flavor.

When a recipe says “salt to taste,” what it really means is salt it to your liking. It’s very important with any dish that you continuously taste it in order to get the seasoning right. Taste it before any salt has been added and then keep tasting it as you add salt. Cooking is all about discovering what you like and what tastes good to you. If you find you will be using this bone broth immediately to sip on, you will want to season it fully. However, if you’re preparing it for future use, it may be best to not add any additional salt or seasoning at this point. For example, if you choose to use this bone broth as the base for a future sauce you would be adding additional ingredients to it at that time. This will alter the flavor and dictate the amount of salt and/or seasoning it needs for that particular sauce.

Try Our Original Recipe for the Perfect Bone Broth