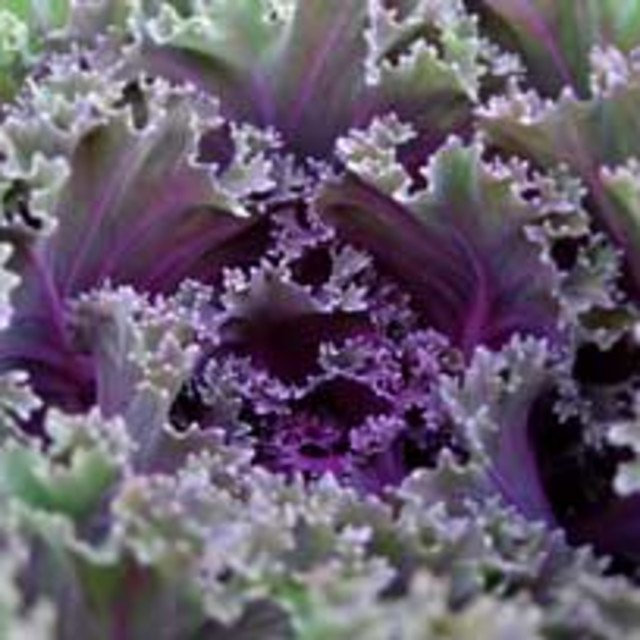 
While kale may have originated in Asia and the Mediterranean, it has long been a “poor man’s” staple of northern Europe and the southern . It is a loose-leafed member of the cabbage family, generally identified by frilled leaftips and sturdy ribs.

Many traditional recipes include kale, such as Portuguese caldo verde and ’s couve a mineira (shredded kale). The taste is very similar to collards and many prefer the latter. Other names for kale include borecole and cow cabbage.

The most common kale varieties are:

Black: Also known as curly/Scots, dinosaur/lacinato, Tuscan kale, and cavolo nero (). These greens have the strongest flavors and thickest leaves.

Ornamental: Originally for decorative use only. Also known as salad savoy and flowering cabbage. Milder than other varieties and typically used as a colorful garnish.

Colors can range from bright and dark green to purple-tinged (Russian kale) to red. Leaves may be ruffly or flat, and stubby or elongated.

Kale thrives in colder climates and will have the best flavors during the height of the season. In fact, it takes several hearty frosts to allow sugars in the leaves to convert from starch. Choose baby kale for salads. Purchase older kale for stews and long-simmering broths.

Check for pest infestations (holes) and browning or yellowed leaves.

Refrigerate in an opened plastic bag. While it will remain fresh for several days, flavor intensifies with age and may become bitter. It freezes well.

• Boil, blanch, or steam and then sauté with garlic and onions. Use as a bed for rice, or pasta, and chicken.

• Kale leaves hold their shape throughout cooking without losing volume.

• Steam, rather than boil, to retain nutrients.


Try one of our favorite kale recipes:
Beans and Kale
Austrian Kale