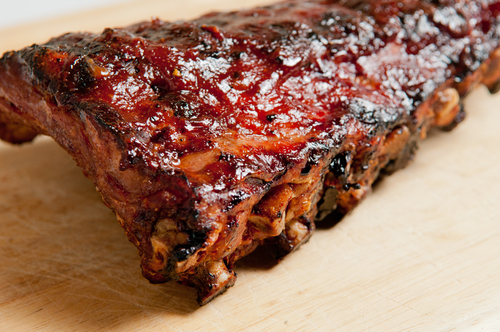 Barbecue has been called “the world’s oldest culinary art" and is described as being a method of cooking meat where it is slow roasted over a low, open flame over hickory, mesquite, oak or pecan wood after which dry or wet sauces, marinades or rubs have been applied. Generally, barbecue sauces are poured over the meat or used as a glaze and include ingredients, such as brown sugar, mustard, vinegar and tomato that produces a sweet, tangy flavor. There are four main barbecue styles, which are reflected by region and include, Kansas City, Texas, Memphis and the Carolinas.

It’s believed that the term barbecue originates from the Spanish word barbacoa, which refers to a cooking technique in which meat was cooked on a green-wood framework over an open fire by the Tianos Tribes of the West Indies. The practice of barbecuing in America came as a result of the introduction of domesticated livestock by Spanish and Europeans settlers. Spaniards introduced cattle and pigs to the West Indies, Mexico and Florida in the 15th and 16th centuries. Due to the culinary influence from the Spanish Conquistadors, as well as the continued introduction of domesticated livestock to the Americas and an abundance of pigs being brought to Jamestown, Virginia by the English, pork became a staple in the Southern diet. Food historians claim the first mention of barbecuing in America was in colonial Virginia, when historical documents from the period describe that the shooting of firearms at a barbecue was illegal. Barbecue recipes began appearing in colonial cookbooks from the southern seaboard of North Carolina to Georgia in the late 16th and early 17th centuries.

Barbecues have been a tradition in the White House since Thomas Jefferson. The 36th U.S. President, Lyndon B. Johnson, gave the first barbecue at the White House, in which he served barbecued ribs, Texas-style. Rosalyn Carter and Jimmy Carter gave a barbecue for approximately 500 guests, which included foreign dignitaries. Data and statistics for popular barbecuing holidays, foods, side dishes and utensils reveal its pattern of influence on American cuisine and culture. Popular holidays for barbecuing are the Fourth of July, 71 percent; Memorial Day, 57 percent; and Labor Day, 55 percent. Common barbecue meats include hamburger, 85 percent; steak, 80 percent; hot dogs, 79 percent; and chicken, 73 percent. Typically, barbecue side dishes are corn, 41 percent; potatoes, 41 percent; and other vegetables, 32 percent. The most used barbecuing utensils include long handled tongs, 77 percent; forks, 64 percent; long handled spatulas, 59 percent; and grill cleaning brushes, 63 percent.

This barbecue guide provides a complete, informative tool, describing the history of barbecue in the United States, the different styles of barbecue by region, the most popular cooking techniques, which include smoking, grilling and braising; events and competitions throughout the U.S., and associations and organizations, which are a good source of additional information on barbecuing.