A delicious, moreish and extra fruity traybake which never fails to satisfy that sweet tooth :)

1. Sieve the flour into a large mixing bowl.

2. Rub in the butter/margarine (slice into small chunks if slightly hard from being in refrigerator) until the mixture resembles fine breadcrumbs.

3. Add in the caster sugar and mix thoroughly.

4. Drop in the 2 egg yolks and vanilla essence.

5. It will be sticky but rub in the yolks with your fingers until they are mixed in thoroughly, causing the flour to be coloured with a slight yellow tinge.

6. Add in about 4 or 5 tablespoons of water to allow the dough to stick together better. The dough should be crumbly however, you do not want to roll this out. Instead you will merely spoon it into your baking tray as it is and press it down with a fork. (I like to line my tray with greased baking parchment, it makes life much easier when removing the traybake after cooking!)

7. Once you have pressed down the dough, lay out the thinly sliced strawberries all over the surface, leaving about 5mm of space around the edges. (You can add more fruit if you like. I have made this with fresh strawberries, raspberries and blueberries together and it was divine!) Try to press the fruit slightly down into the dough to secure it in place - this will make it easier for you to spread the almond filling over the fruit in the next stage.

8. Now sprinkle some caster over the fruit so it almost creates a jam when it stews in the oven (add sugar to your own preference here. I generally pour it from the bag quickly up and down the fruit, not too much but not too little!)

2. Mix the caster sugar with the ground almonds in a separate bowl.

3. Stir the dry mixture into the egg whites (it will shrink in size and will look like not enough to cover your traybake, don't worry it just about works!)

4. Now spoon out this almond mixture over the fruit on your pastry base. It will be quite tricky to do this

without pulling up some of the fruit as you spread it due to the mixture being rather sticky. Don't worry, the almond mixture will expand slightly as it cooks. If you feel you don't have enough almond filling (I like my layer of filling to be quite thin), by all means whip up a bit more (perhaps half the filling mixture again).

5. Now sprinkle some sliced almonds over the top (if you like) and place in the oven for about 30 mins at 180°C (350°F) for a fan assisted oven, until golden brown.

6. Remove from tray after leaving to cool for 10 mins, then allow to cool on wire rack for 30 mins.

7. Slice into squares (whatever size you prefer) and enjoy! 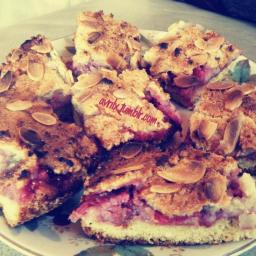 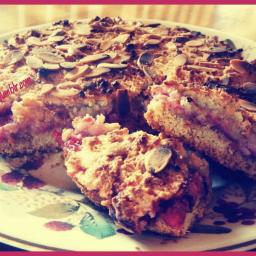