"A healthy whole wheat crust that comes out soft and chewy on the inside and crisp on the outside. Use with your favorite pizza toppings or pizza recipes."

In a large bowl, dissolve sugar in warm water. Sprinkle yeast over the top, and let stand for about 10 minutes, until foamy.

Stir the olive oil and salt into the yeast mixture, then mix in the whole wheat flour and 1 cup of the all-purpose flour until dough starts to come together.

Tip dough out onto a surface floured with the remaining all-purpose flour, and knead until all of the flour has been absorbed, and the ball of dough becomes smooth, about 10 minutes.

Place dough in an oiled bowl, and turn to coat the surface.

Cover loosely with a towel, and let stand in a warm place until doubled in size, about 1 hour.

When the dough is doubled, tip the dough out onto a lightly floured surface, and divide into 2 pieces for 2 thin crust, or leave whole to make one thick crust.

Form into a tight ball. Let rise for about 45 minutes, until doubled.

Roll a ball of dough with a rolling pin until it will not stretch any further.

Then, drape it over both of your fists, and gently pull the edges outward, while rotating the crust. When the circle has reached the desired size, place on a well oiled pizza pan.

Top pizza with your favorite toppings, such as sauce, cheese, meats, or vegetables.

Bake for 16 to 20 minutes (depending on thickness) in the preheated oven, until the crust is crisp and golden at the edges, and cheese is melted on the top. 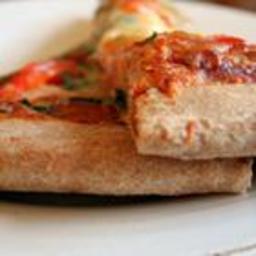 Erinmb
Usually struggle with store bought dough until I want to throw it out the window-thought I'd try making my own. Used all whole wheat flour because I was out of AP, and it still came out perfect. Incredibly easy to roll out, didn't rip or shrink up like the one I buy. Am making again tonight. So glad I tried this recipe!
7y
Reply
Reply

gabeshappymom
Great recipe! I make it in my bread machine and throw it in the freezer. I just put a bag in the fridge the night before we want pizza. Pre baking the crust for 3-5 minutes before putting the toppings on is the key to making it taste like pizzeria crust. You must try this out!!! Awesome
7y
Reply
Reply

Aimeelady
OMG This IS amazing!!! Made this and froze it, had it this afternoon for lunch with the company and it was STELLAR! Easy Breezy to make with these simple instructions too, great work, props to the chef!
8y
Reply
Reply