If you are eating paleo or trying to stay whole30 compliant this is a way to get your bbq fix. This isn't some pale shadow of barbecue chicken for those with dietary restrictions and youwont feel like youre settling for something less than barbecue. This is absolutely delicious and fairly easy to make. You can make the sauce in advance making meal day even easier. Recipe calls for drumsticks, but you can do other types of chicken or a mix if you prefer

Stir together all of the barbecue sauce ingredients except the oil and garlic.

Heat oil in a saucepan over medium-high heat. Add the minced garlic and saute until fragrant and straw colored. Add the barbecue sauce ingredients and bring to a boil. Reduce heat to low and simmer uncovered for 25-30 minutes or until thickened. Set aside to cool.

Measure out 1/2 cup of the sauce and coat the chicken with it (I used a basting brush). Cook for 4-6 hours on low.

When ready to serve, set the oven rack 10" from the broiler and heat the broiler on high. Set the drumsticks in a single layer on a lightly oiled slotted broiler pan. Coat them with half of the remaining sauce and broil 10-15 minutes until charred and crispy. Flip them over, coat with the rest of the sauce, and broil again for 10-15 minutes to crisp the other side. Serve immediately with guacamole slaw or side dish of choice.

For the guacamole slaw:

Stir together the guacamole, vinegar, oil, and mayo (if using)

Let chill for at least 30 minutes before serving.

Variation -- pulled pork: Use a pork roast instead of chicken drumsticks, preferably a fatty cut like shoulder. Rub with BBQ seasoning and put it in the crock pot, pour half of the sauce over the top, and cook for about 8 hours on low. Shred with two forks and serve with the rest of the sauce. 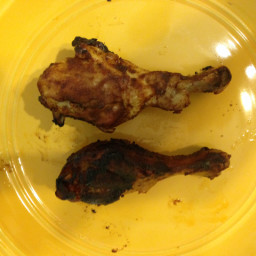