So this is a bit weird. I realized about six months ago that I had never actually tried a fresh apricot before. Not only that, I had built up this weird aversion to them in my mind and had no desire to try them even though I absolutely love the dried version. Weird. It’s sort of like people who love spaghetti sauce and ketchup but won’t dare touch a real tomato. True story, I live with one of those people and it sometimes drives me crazy.

However, a few weeks back a friend snuck some cut apricots into a salad that I mistakenly took as peaches and presto chango, I immediately fell in love….and proceeded to buy like 4 lbs. of them the next time I went to the market.

So this past weekend when contemplating what to bring to brunch with some girlfriends and staring at the mountain of apricots in my kitchen, I decided to make a lightened up version of this delicious recipe for Apricot Breakfast Crisp from Smitten Kitchen. It tastes delicious on its own, served with some yogurt for added protein, and also makes a killer dessert. 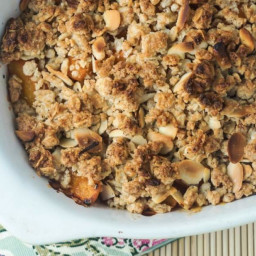