Amazing flavor, and not too sweet. The mild sweetness of dried apricots goes so well with pork.

For full pictures, please see the recipe at http://capnrons.com/R-M-Apricot-Stuffed-Pork-Loin-Roast.html?ID=BO_7_2011

When working with Butcher's Twine, placing it in a bowl will keep it in place, and keep the spool from rolling all over your counter top, or falling on the floor.

4. Cut enough strings to tie on the roast every 1 1/2 or so. To tie, begin in the middle and work towards both sides. When you're finished, place the roast, fat side up, on a rack in a pan. Pour some of the blacken, then the Kosher salt on top, and rub it in real well.

6. Place the meat on a rimmed platter, and cover with aluminum foil. Let it rest at least 15 minutes for the juices to redistribute within the meat. The high cooking temperature of the oven draws any moisture in the meat to the outside. Letting it rest for the 15 - 20 minutes will give the juices time to travel back to the center of the meat.

I like slicing a Pork Roast into 1/2 thick slices. And try to use a long, sharp knife, so you can cut it in one pass of the knife. If you use a short knife, and have to saw the cut, you'll end up with a funny looking slice of pork that will show all of those small cuts you made.

Butt Kickin' Blacken contains neither Slat nor Sugar and is available at http://capnrons.com/index.html?ID=BO_7_2011 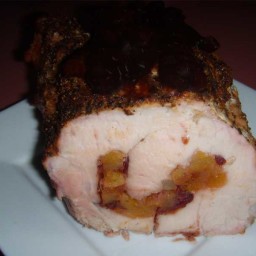 omagnas
This was okay. I liked it more than my husband. I might make it again. If I were to do it again, I'd make sure I got thinly sliced salami -- that would make it easier to roll the pork loin.
5y
1 reply