This artichoke risotto recipe is warm and elegant comfort food for late winter or early spring, when the artichokes are in peak season.

Prepare a steamer pot with a small amount of water to steam the artichokes. Cut off the top of the artichokes and level out the bottom -- if your artichoke is a good one it should have the leaves fairly close together, and about 1 inch still left of stem. You'll be steaming it for 40 minutes or so, then letting it cool, getting just the artichoke hearts for your risotto, adding them at the last minute.

Bring the steamer to a boil.

Cut the pointy ends off the artichoke; squeeze one of the lemons over all of them to keep them from browning. Steam in the steamer: set the timer for 45 minutes and steam the artichokes at a near-boil in a covered pot. (Do NOT boil them -- you want to steam them above the water -- I use a multi-pot for this.)

-- Prepare the risotto base --

Toward the end of the artichoke steaming, bring a large pan to medium heat. Add olive oil, and saute minced garlic, onion and shallot for 2-4 minutes or until browned.

-- Be certain the chicken broth is heated; you want to add only heated broth to the risotto, a bit at a time, to incorporate it --

Meanwhile, heat the entire chicken broth over low heat in a separate saucepan.

To the onions/shallots/garlic, add the mushrooms, and brown (3-5 minutes). Stir frequently. Add risotto rice, and bring heat down to low. Stir frequently for 3-5 minutes to brown the rice and coat it with the onion/shallot/garlic/mushroom/oil mixture.

Ladle by ladle, slowly add the chicken broth over the course of the next 30 minutes. Each ladle will take 3-7 minutes of stirring to incorporate. Add just enough to the risotto to keep the bottom of the pan in liquid, and wait for it to incorporate into the rice. Stir VERY frequently; do not leave it to cook. The risotto WILL try to stick to the bottom, so stir it frequently! Add chicken broth and also add the wine.

After about 45 minutes of this (taste it!) the risotto will fully incorporate the chicken broth, wine and other liquids. The risotto should be the texture of cooked rice -- if you detect any dry parts of it, keep going. There is no way to tell you -exactly- how long this will be, or how much liquid you'll need, but it's likely 40-50 minutes, and roughly twice as much liquid as rice. Keep going until it's fully incorporated. Season to taste with salt and freshly ground pepper.

When done, add the cream and bring it off the heat. Slice the artichokes and remove the choke.

After the artichokes have partially cooled, slice them lengthwise in half. Using a spoon, core out the "choke" -- the inedible hairy portion of the center. Be sure to get ALL of the choke -- it's got a terrible, hairy texture and you don't want it in the food. (Wash the knife/spoon to remove it.)

Cut just the artichoke hearts into eighths (set aside the leaves -- use them for garnish later or them as a delicious appetizer!). Add the artichoke hearts to the risotto. Stir in the cream (cream is optional, and not entirely authentic, but I prefer it during the winter as it adds a deep, wonderful richness.)

Serve, with freshly ground pepper, a squeeze of lemon juice, and grated parmesan at the table. 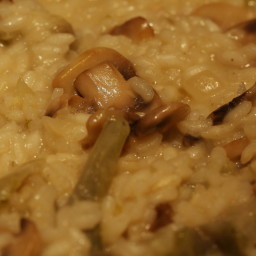 Lighting was not terrific in the photo, but trust me, it was delicious. 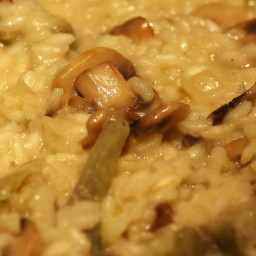 I recommend wine or beverage pairing

Chocolotto
Awesome, fantastic, I could go on & on. Fantastic overall, and it's not just because I love risottos. Even a very picky eater in the household was enjoying this!
9y
Reply
Reply

Dooter55
Tasty! I didn't include artichokes because it was a lot more work. Still very good!
9y
Reply
Reply

stevemur
Cobbled this recipe together using a basic risotto technique and ingredients we had in the house. Loved it.
10y
Reply
Reply