Cooking the artichokes sous-vide achieves greater flavor concentration, as well as a considerable improvement in its color because oxidation is prevented. When cooking vegetables sous-vide, we must remember that the temperature must always exceed 85�C/185�F to successfully alter the cellulose.

Wash the scallops and save just the meat. Just before assembling the dish, cook them in the pan so that they are golden brown on the outside and rare on the inside.

To do this, heat a pan to 220?C. Then put in some groundnut oil and a little butter and immediately throw the scallops in as it is sizzling. Toast them for a total of about 6 minutes, turning every 90 seconds.

Wash the artichokes and vacuum seal them with the olive oil and salt. To prevent them from browning whilst exposed to the air, sling some Ascorbic Acid around. Place about 30grams in a 3 litre kenwood bowl of water.

Cook in a bain-marie at 90?C/194?F for 45 minutes. When time has elapsed, remove the bag from the cooking thermos and cool them rapidly in a blast cooler or ice water bath. Just before serving, regenerate at 65?C/149?F. Open the bag, set aside two artichokes and quarter them. With the rest, make a fine emulsified puree in a food processor.

The artichokes must be fully cooked to make the puree, and it's a bit pants anyhow. Might be best to just slice the artichoke hearst and arrange.

Prepare the dressing by combining the olive oil with the soy sauce and honey. use an immersion blander. It tends to separate fairly quickly, so some sort of molecular addition is probably required here.

Heat the Isomalt sugar, glucose and fondant in a saucepan until they turn a yellowish color. This requires 8-9 on the small induction ring on a small pan, and will be a temperature of 180?C-ish.

Immediately add the ginger powder, which must be DRY - you cannot use fresh ginger, as it will obviously explode at this temperature. Mix well and remove from heat.

Spread a very thin layer of this nougat onto a silicone sheet, using a palette knife.

It's best to use a silicone sheet - I tried aluminium foil and it stuck a bit and made small pieces, wheras the silicone sheet made everything in one huge pane.

On a second attempt, with a rolling pin to hold it between two aluminium sheets, it worked a lot better.

The version on the greaseproof paper stuck to it a lot.

Spoon three small mounds of artichoke puree into the dish. Top each one with a scallop. Dress all three scallops with the soy-honey oil and add fleur de sel, fennel and a small piece of ginger nougat. Finish with two artichoke quarters.

Joan Roca says: Cooking the artichokes sous-vide achieves greater flavor concentration, as well as a considerable improvement in its color because oxidation is prevented. When cooking vegetables sous-vide, we must remember that the temperature must always exceed 85?C/185?F to successfully alter the cellulose.

Another work of possible genius by Jean Roca and Salvador Bruges. Based on the original Jean Roca 158 recipe, and modified by Mathias. 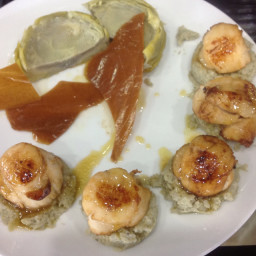 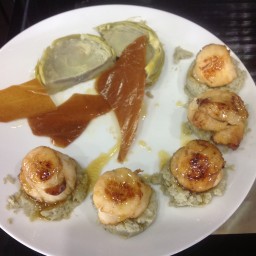 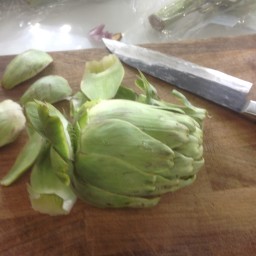 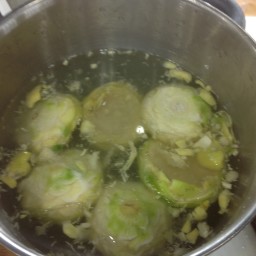 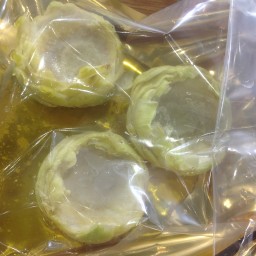 ready to seal for sous-vide 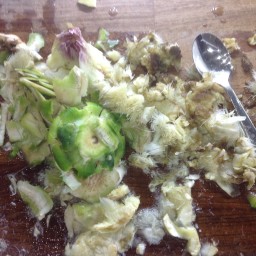 Look at the mess

Latexiron
Much better. HEat the pan to 230c before throwing in 15ml melted butter nd 15ml groundnut oil together, sling the scallops in on top. Cook for 6 mins up until caramelised, for 90 seconds each side. Puréed artichokes are a bit of a waste, s just slice them. Soy ginger honey sauce is great, but tends to separate quickly. Experiment with emulsifiers. Washing the artichokes takes 30g as orbit acid in 3l water. (author)
9y
Reply
Reply

Latexiron
Not really ideal. Too much effort for the result. [I posted the recipe]
10y
Reply
Reply