A lower carb take on those wonderful sandwiches you enjoy at the Vietnamese lunch counter.

Combine mayonnaise, Splenda, chili sauce, and lime juice in a bowl; set aside.

Stir-fry pork in 1 in a large nonstick skillet (spray w/ oil if needed) over medium-high heat, breaking up large chunks with a spoon. When cooked through, add ginger, garlic, and scallion; stir-fry until fragrant, about 1 minute. Transfer pork mixture to a plate, wipe out the skillet with a paper towel, and return pan to the burner over medium heat.

Beat egg with milk and cilantro. Dip both sides of a tortilla in the egg mixture to coat, then fry in 1 teaspoon of oil until golden, about 1 minute. Flip tortilla over, fry another minute, and transfer to a cutting board; dip and fry remaining tortilla in the same manner.

Assemble wraps by spreading half the mayonnaise mixture over each of the tortillas, Divide the pork mixture between the tortillas, then top with vegetable salad. Roll tortillas like a burrito, then cut in half on a bias. Serve immediately.

Adapted from recipe in "Cuisine at Home" Dec, 2007

VARIATIONS: Try strips of thinly sliced beef cooked with Asian BBQ sauce or some shredded chicken with five-spice powder. The vegetables might also include shredded jicama, brocolli rabe, or other crisp veggies.

I slimmed this recipe down to make it more diabetic friendly. 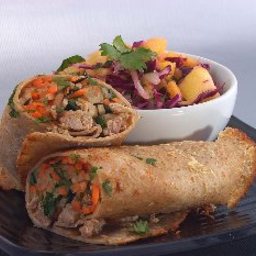 mia2626
The ginger was too overpowering for us. I would try it again but probably cut way back on the ginger or completely omit it. Please keep in mind while reading this review that ginger is not something that I use alot in my recipes so this could have been our problem. My husband loved it so I gave it a 4!
11y
Reply
Reply

debgoody
Great recipe with wonderful flavor! I definitely will be making these again even though they were just a little time-consuming on a busy night that I chose to make them. My family really enjoyed them. Thanks for a great dish.
13y
Reply
Reply

scturner97
I'm just not absolutely certain if I'd make this again. The kids at it, that's always a plus. I think this will go to the, "try again" file. We just need to see how it is again to be sure. The mayonaise sauce was a little sweet and the pork could have used some salt. Everyone loved the way the batter made the tortillas. They were a bit thicker and cakier.
14y
Reply
Reply