Preheat a grill or grill pan over medium high heat.

In a large mixing bowl, mix brisket and short rib until blended; season with salt and pepper.

Separate into four balls and flatten into 3/4-inch thick patties. Season both sides of each patty with spice mixture.

Grill buns, turning over once with tongs, until toasted. Cover the burger with the top bun.

Layer bottom bun with lettuce, tomatoes, pickles and red onion before adding the burger and top bun from the grill. Serve immediately.

Serve ketchup and extra pickles on the side for those who want it. 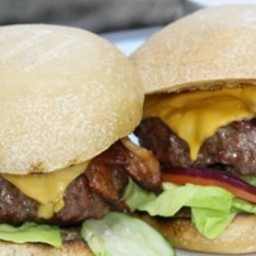