Using real thick and smokey bacon really gives this plenty of flavor. It’s cooked slow, because of the bacon, and, as a result, the fillet comes out real moist. There’s so much flavor in the meat, additional sauce isn’t needed.

1. Remove any silverskin, and extra fat from the fillets. Wrap a piece of bacon around the outside, and either secure with a toothpick, or wrap with butcher's twine. Don't overlap the bacon by more than 1/4", you want to make sure that the bacon will cook. However, if your using thin bacon, you might want to use 2 pieces to get the extra thickness and flavor. Securing the bacon with toothpicks works, but by tieing the bacon, you're forming a more rounded piece of meat that will look nicer on the plate.

2. Oil the meat liberally, dust with the blacken. salt, and pepper, and rub it into both sides of the meat. Se the meat on a platter and place back in the refrigerator until you're ready to cook it. Don't be afraid to use a little more slat than you think you should, it's on the grill and won't end up as strong.

3. Cook over a medium hot grill for about 10 minutes per side. Ultimately you want the meat to reach an internal temperature of 110 degrees. If you cook on too hot a fire, the bacon will flame up and you'll end up with burned bacon, and burned meat. The oil on the outside helps the meat to sear (keeping in the juices), and helps keep the meat from sticking to the grill.

4. When testing the internal temperature of a thin pieces of meat, be sure to insert the thermometer in from the side. 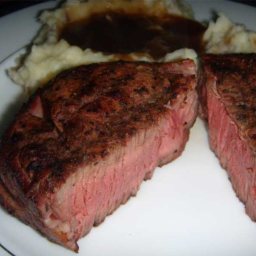 rhondahoganmartin
I fixed this Saturday and it was a big hit! We are definitely going to have this again! Thanks for the recipe.
10y
Reply
Reply

CapnRon
Butt Kickin’ Blacken contains neither salt nor sugar, and is available at: http://www.capnrons.com/index.html?ID=Chow_12_2009 [I posted this recipe.]
12y
Reply
Reply