Tired of the same old pork chops, I thought I would do them on the grill, bacon wrapped. I used a mixture of charcoal briquettes and charcoal. The briquettes last longer and the charcoal adds that campfire flavor, while the bacon added the taste of smoked hickory.

Butt Kickin' Blacken contains neither salt, nor sugar. Is you substitute a different blacken seasoning, you'll probably have to adjust the recipe's salt content. It is available at: http://www.capnrons.com/index.html?ID=BO

1. Trim the fat and silver skin from the pork loin, then cut it into 8 equal pieces. Each chop should be 1 1/4" - 1 1/2" thick. If your pork loin isn't large enough, you may get only 6 pieces out of it. The thick chops, will end up more tender and moist after they've been cooked on the grill.

2. Mix up the ingredients for the marinade. Then, place the pork chops, and the marinade into a plastic bag. Set this in the refrigerator for at least 24 hours, but you could leave it as long as 48 hours without harming the chops.

3. Cut the butcher's twine into lengths that will go around each chop, with a bunch additional length. Make sure you cut a couple of extra strings, because you might drop one or two on the floor like I usually do.

4. Wrap the bacon around each chop, then tie with the twine.

5. Set them on a platter, drizzle with the oil, put a heavy dusting of blacken and a little Kosher Salt on each chop, and rub it in well. Turn them over, and do the other side.

If you notice that the seasoning isn't pasty after you've applied it to the chops, just add a little more oil.

6. Cook over a fairly low fire, on the grill. Mine was on for about 50 minutes this time. Cook to an internal temperature of 140 - 145 degrees, with an instant read meat thermometer. When each is done, place on a platter and cover with aluminum foil to rest. I found that I took 4 off the first go-round, then gave it another five minutes. As they cook, you'll feel them begin to firm up. If they're still squishy, they probably aren't done yet. 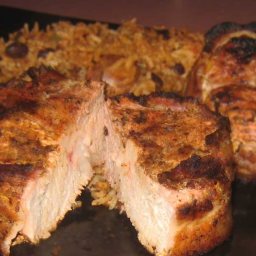