This appetizer can be made up to 2 weeks in advance. Assemble the pastry, cheese and apple compote, but don't brush the dough with the egg wash. Instead, wrap the pastry tightly with plastic wrap and freeze until ready to bake. Then brush the frozen pastry with the egg wash and bake in a 350°F oven for 45 to 50 minutes.

In a 2-quart sauté pan over medium heat, melt the butter. Add the apples and sauté, stirring occasionally, until the apples are tender and have released most of their liquid, 5 to 7 minutes. Add the sugar and cardamom, stir to dissolve and cook, stirring occasionally, until most of the liquid has evaporated, 12 to 15 minutes more. Remove from the heat and let the apple compote cool to room temperature.

Preheat an oven to 375°F. Line a baking sheet with parchment paper.

Place the dough on a lightly floured surface and set the cheese in the center of the dough. Fold the dough up over the sides of the cheese, pleating the upper edges to fit snugly around the cheese. Pinch the dough together in the center to seal. Brush the dough evenly with the egg wash and place on the prepared baking sheet.

Bake until the pastry is golden all over and crisp, 40 to 45 minutes. Let it rest for 5 minutes, then transfer to a platter along with a sharp knife and the crackers. Serve any remaining compote alongside.

Can make ahead, put in fridge, then add egg wash and cook on day you need it.

ALTERNATE: Instead of compote, could use fig or red pepper jam

TIP: The best thing to do it put the compote in the middle of the cheese wheel (split in half) and not on top (too difficult). Also, cover the entire thing with puff pastry. It may not look as pretty, but it prevents the cheese from leaking out

SERVING SUGGESTION: Avoid using highly savory or sweet crackers with this because they might mask the tastes of the dish. The recipe recommends table water crackers, which are what I used. 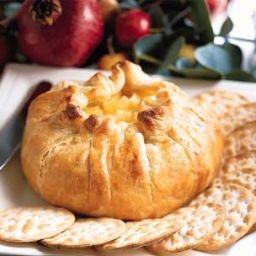