Can be paired with fruit for a wonderful brunch.

Slice bread into about 20, 1 inch slices. Arrange the slices in a greased 13x9 glass baking dish in 2 rows, overlapping the slices. In a large bowl combine the eggs, half and half, milk, sugar, vanilla, cinnamon, nutmet and salt. Beat until well blended but not too bubbly. Pour this mixture over the bread slices, making sure all are covered evenly with the egg mixture, spooning some of the mixture between the slices too. (This will seem like a lot of liquid but it will saok in.) Cover with foil and refrigerate overnight. The next day preheat the oven to 350 degrees. If there is extra egg mixture in your bread dish, just spoon it over the bread before putting the following over it.

Combine butter, brown sugar, pecans, corn syrup, cinnamon, and nutmeg in a medium bowl and spread evenly over the cold bread mixture that you have taken from the fridge. Sprinkly a little extra cinnamon over the top if desired for a garnish. Bake uncovered for about 40 minutes until puffed and lightly golden. Serve with maple syrup or honey if desired.

The topping can also be made the night before and left out at room temperature before spreading over the bread and baking. 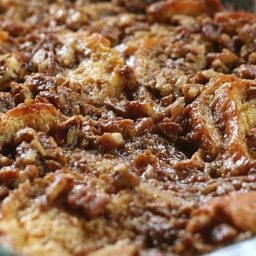 A sinfully delicious way to start your day!

Sandy041071
Make sure you have at least 20- 1" slices of bread. I could only fit 14 in my 9x13" glass pan and it never got done, way too soggy. Very disappointed, wasted all those ingredients. Sorry
7y
Reply
Reply

tonirobbins2
I tried to make this today but it didn't turn out. The bread that was overlapped didn't bake. In addition the directions were unclear to me. It tells you to add a couple of the ingredients twice and lists an ingredient but doesn't say where to add it in the directions.
7y
Reply
Reply

Boomerman
I made this recipe on Christmas Eve for Christmas morning. As it baked I was happy to watch it puff up to fill the pan. My husband and I plus our eight guests for brunch all loved it. With all the fat and calories that must be in this recipe I'm going to save it for special occasions when it's ok to misbehave!
8y
Reply
Reply

Jahizer
Delicious! Made with bread baked from frozen bread dough. I am adding this to my favorites.
8y
Reply
Reply

sgrishka
This was a great recipe and fun to make with the kids. The baked French toast was rich and delicious...the perfect start for a cozy weekend morning!
10y
Reply
Reply