Delicious! Great for company too (though they are a bit messy to eat). If you prepare the stuffing while the artichokes are steaming, it takes about 60-75 minutes total, including preparing the artichokes. Fantastic instructions for how to prepare (trim) the artichokes are located here; http://veganyumyum.com/2007/12/artichokes-with-sundried-tomato-and-marjoram-stuffing/

Prepare (trim) artichokes. For great instructions online for how to do this, see:

Steam the artichokes: place artichokes in a dutch oven or other nonreactive cookware deep enough to place the artichokes in (standing up on their bases - make sure they won't fall over) while the pot is covered. Do not use uncoated cast iron or aluminim - it will discolor the artichokes. The best choices are an enamel-coated cast-iron, stainless steel, and glass. Place about an inch or an inch-and-a-half of water in the bottom of the pan, bring to a boil, lower the heat, cover, and cook for about 30-45 minutes, until the leaves pull away easily.

Preheat oven to 350 degrees about 30 minutes after the artichokes start cooking (or however long your oven needs to heat up - it will take about 10 minutes to stuff the artichokes).

While the artichokes are cooking, heat butter and oil over medium heat in a large skillet. Add onion and garlic and cook until soft. Add sliced mushrooms, lemon juice, red pepper flakes, oregano, basil and salt. Cook until liquid rendered from mushrooms dissipates. Add wine and cook mushrooms until wine is absorbed. Remove from heat and stir in parsley, breadcrumbs and cheese.

Stuff mushroom mixture into artichokes, but do not pack. Most of the stuffing should be in the center of the artichoke, with small amounts tucked in gently between the leaves. Place stuffed artichokes into a lightly greased baking pan, just large enough to hold artichokes. (Artichokes should stand upright and not be allowed to fall over.) Drizzle olive oil or melted butter over stuffing and leaves. (Can be made and refrigerated up to 2 days in advance up this point. Bring to room temperature before baking.) Bake for 20 minutes, or until heated through. Serve with plenty of lemon wedges - drizzling the artichoke with lemon oil as you eat really rounds out the flavor. Makes four servings.

Note: Make sure there is a place for everybody to put the leaves after they eat the tender portion at the base of each leaf - either one large bowl in the center of the table, or individual bowls for each person. 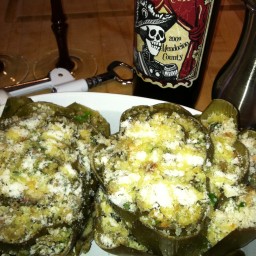 ready to go into the oven - 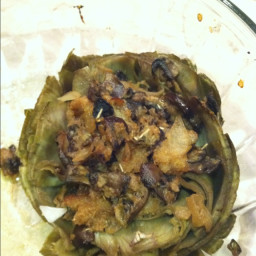 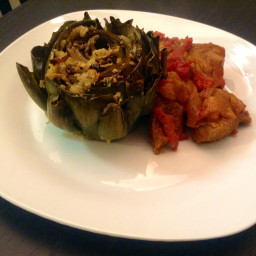 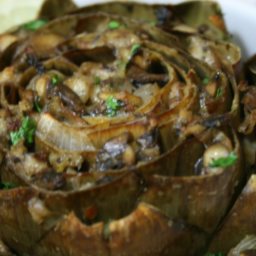 Fresh out of the oven. Eat by gently pulling off the leaves, and scraping off the tender parts with the stuffing - a fabulous combination! Make sure to have someplace handy to discard the leaves once you've eaten the tasty parts. 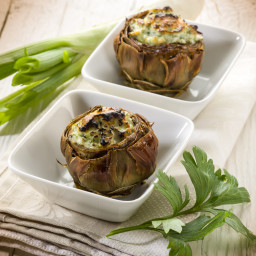 stacey_rothberg
So delicious!!!!! Omitted the breadcrumbs and skimped on the cheese for a bit low cal., it was still sooo yummy!!!
9y
Reply
Reply

pepperstewart
These were so good! I will definitely be making these again.
9y
Reply
Reply

chefaustintx
Very nice - I struggled a bit to trim the chokes out, but the artichokes I used were very large - maybe next time I'll try removing them after the steaming process, but regardless, I know there WILL be a next time - absolutely delicious!
10y
Reply
Reply

DaleAnne
This was a great recipe! I loved the freshness of the lemon juice and the bite of the red pepper flakes. Yummy!!
11y
Reply
Reply

Guyerj
We skipped out on the wine and some of the herbs and this dish was still delicious!!!
11y
Reply
Reply

missgeisha
This was wonderful! Typically, I just steam my artichokes and serve with garlic butter, so this was a nice change. The stuffing was delicious and I'll probably put it in other veggies, like tomatoes or peppers. I drizzled lemon juice over the final product as I had no fresh lemons and it really did make the flavor of the stuffing pop!!! Wow!! I did, however, still use garlic butter for dipping the leaves. I will be serving this again in the future!
12y
Reply
Reply