Line the bottom of a 9"x9" baking dish with a layer of vanilla wafers. This recipe will not use the whole box, so you may snack, but don't get carried away.

Peel the bananas and slice into 3/8-inch rounds. Cover teh banana slices with plastic wrap to keep them from darkening and quickly make your pudding.

Combine the sugar, flour and salt in a bowl, and stir well to mix. Mash out any flour lumps with back of your spoon. Set aside.

In a heavy saucepan, beat the egg yolks well. Over medium heat, add the flour mixture to the egg yolks, alternately witht eh milk and vanilla, stirring constantly. Bring to a gentle boil and, when the mixture begins to thicken, add the butter, continuing to stir. Keep boiling and stirring until mixture reaches a nice pudding consistancy. (Note: If you're working with an electric cooktop, adjust the heat so that it's hot enough to boil, but not so hot that the pudding scorches.) Remove from heat.

Place a layer of banana slices in the baking dish on top of the vanilla wafers. Don't stint and put one slice banana per wafer. Line those banana slices up edge-to-edge. Pour, spreading as necessary, half of the pudding over the banana slices, and cover with the remaining pudding. 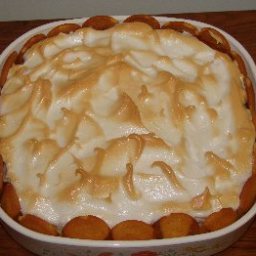 scott_in_kc
This is a fantastic dish. Once you make the homemade pudding you'll wonder how you ever settled for instant.
10y
Reply
Reply