Makes enough for one 9" double-crust pie.

Cut butter into 1" cubes or smaller.

Place butter and flour together in a large bowl, and cut the butter into the flour until the mixture resembles coarse oatmeal, with butter lumps no larger than small peas.

Add water 1 tbsp at a time, stirring with a fork, and using hands to press together at the end. Use less water if possible.

Shape into two discs and leave in the fridge.

To roll the dough out, get two large squares of wax paper, and place the dough between them. Roll it out once, fold it up into a ball, and roll it out again. This helps with cracking dough.

Let the dough rest in the fridge for a while before baking. Brush the bottom crust with egg wash to avoid a soggy crust.

To make a double-crust pie, lay the second crust on top of the pie, tucking it under the bottom crust. Add dough where needed around the rim of the pie. Seal with a fork. Cover the edge of the pie with foil to prevent burning.

Bake at 375F for around 50 minutes. Crust should be golden brown. 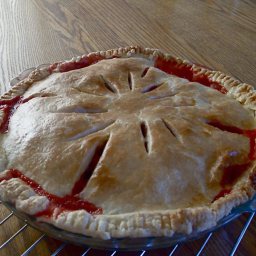 Strawberry pie - making vents too close to the rim means a bleeding pie!

xianny
Chill all implements and ingredients and make sure things are kept cold throughout. Do not put dough in the freezer as that will flash-freeze it. Washing hands with cold water helps. [I posted this recipe.]
11y
Reply
Reply