BBQ Eggrolls just sound "wrong", right? That's what I thought when we saw them on a menu at The Rib Shak in Perdidio Key, FL on Spring Break 2013. But boy were they good! I smoke my own pork bbq but feel free to buy some from your favorite local BBQ joint.

Mix the pork, sauce and BBQ rub together.

Place egg roll wrapper on counter diagonally so one corner points towards you.

Place 1/4 cup of the pork mix and 1 stick of cheese in the center lower third as pictured.

Roll bottom of egg roll wrapper over the mixture as pictured. Fold the two side corners inwards. Roll upwards to the top corner. Repeat with other 3 wrappers.

Remove to a raised rack and keep warm while repeating with the others.

We made seven different versions, some trying to get the right texture and then some just for variety.

Version 2 - pulled pork, pepper jack cheese, a little sweet and spicy bbq sauce. Same as above and further away from the taste of Rib Shak's than version 1.

Version 5 - chopped pork, sweet bbq sauce, bbq rub all mixed together, then cheese. Spot on, that is it.

Version 6 - tried a version without cheese but added a "dry slaw" of shredded cabbage and carrots tossed in NC vinegar sauce then drained. Was about a 50/50 ratio of meat/slaw. Would be better 30/70 meat/slaw. Worth trying again to experiment.

Version 7 - vegetarian of just slaw. Actually very good although not much different than a regular egg roll. This would be something that might be good to offer in a meat laden BBQ menu just to give your guests something different. 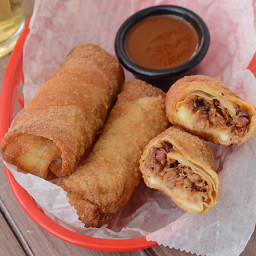 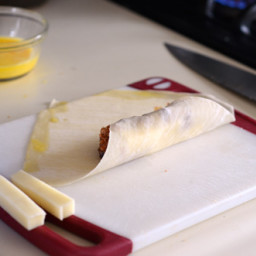 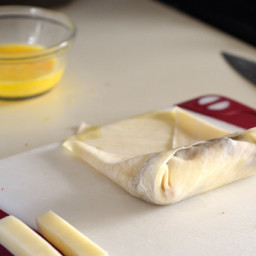 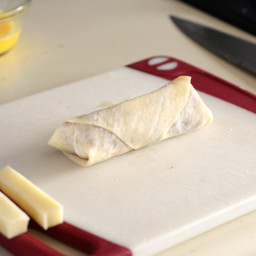