To begin - I purchased a 17lbs Brisket from Costco and did not cut any of the fat off, just prepared it the way it came.

Make the "Big Bad Beef Rub" and set aside.

Filled Bar-B-Q with Charcoal and Wood Chunks – I filled the Oval-XL with the Organic Charcoal and intermixed a couple hand fulls of the Jack Daniel's barrel wood chunks.

Fire and Set Temperature – to the 130-160. Start two small fires in the middle of the Oval-XL. Installed Deflector Racks and Plates.

Pan – I just had to try this so, I placed a pan on the Deflector Plates and put about a cup of water a little of the Better the Boullion mixed in. Then closed the lid and adjusted the Vents.

Pre-Rub Prep - The measurements for the rub was not enough to completely cover the 17lbs Brisket when I started, so I just kept adding more. I ended up using about 6oz of the 8oz jar. of the Better that Boullion container. The Better than Boullion just sounded really good and I feel it was exactly what was needed (course I have no other experience... but it sure made it look good). I also used the Olive Oil because I read that the Olive Oil activates some of the seasoning in the Big Bad Beef Rub. - I had a good portion of Rub left over, but it goes really well on turkey burgers!

1:00pm Temp @ 285F Brisket 180F - Opened the lid and did not really know what to think (see picture below). I moved the brisket to the pan that was under the racks and prepared it for the “Texas Crutch.” I just left the meat probe where it was and tried to wrap a couple layers of Aluminum foil over the top. I think this worked well, at least I would do it the same way again.

2:30pm Temp @ 300F Brisket @ 199.7 - I took the Brisket and placed it (while still in the Texas Crutch Aluminum container) into a big Rubbermaid container full of my wifes good towels... at lease I know they are the good towels now! This is called a “Faux Cambro." and it seemed work work good. I know your are suppose to pull the meat back out of the Faux Cambro and cook it a little more, but I was just to over my head at this point...

5:00pm Family and friends had arrived and were excited to see how this Brisket had turned out. Everyone thought it smelled great... however when I finally pulled the Aluminum foil off (like this was some huge unveiling, silence had filled the room) my mom said “You expect us to eat that?” Its amazing, you invite people over for a meal and there is so much stress hoping everything is going to turn out well and you have no experience as this is your first cook and your mom has to say something like that? - crazy... Anyway, thats whats good about inviting family over for your first attempt... you can quickly run back over to Costco for some pizza if you have to :) 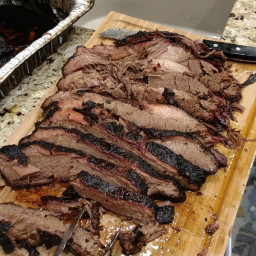 All Ready and Cut