Position a rack in the center of the oven and heat the oven to 325F.

Put the tomatoes, 2/3 cup water, the soy sauce, sherry, and brown sugar in a bowl and stir. Add the star anise.

Pat the short ribs dry with paper towels and season them with pepper.

In an ovenproof pot that?s large enough to hold all the ribs in no more than two layers, heat the oil over medium-high heat.

Put as many ribs in the pot as will fit without crowding and brown them on all sides, about 2 minutes per side. Transfer to a platter. Brown the rest of the ribs, adding more oil if needed, and transfer to the platter.

Pour off the fat from the pan, reduce the heat to low, and add the garlic, ginger, and scallions, stirring and pressing them against the pot, for 1 to 2 minutes to bring out their flavor.

Return the ribs to the pot and pour the tomato and soy sauce mixture over them. Bring to a simmer and cover.

Transfer the pot to the oven and braise the ribs, lifting and turning them about every half hour, until the meat is very tender and starts to fall off the bone when pulled with a fork, 2-1/2 to 3 hours.

Transfer the ribs to a serving platter (or if you?re working ahead, transfer them to a baking dish; refrigerate, covered, when cool).

Pick out and discard the ginger and star anise from the pot and pour the remaining sauce into a large, clear measuring cup.

When the fat rises to the surface, after about 5 minutes, spoon it off and discard. (Or, if you?re working ahead, cool the sauce in the pot, refrigerate it, and skim the solid fat off the top.

When it?s time to reheat the ribs, return them to the pot and heat gently in the oven.)

Meanwhile, melt the butter in a large skillet over medium-high heat. Add the leeks and cook, stirring frequently, until they begin to brown, 3 to 5 minutes.

Reduce the heat to medium low and continue cooking, stirring frequently, until tender, about 3 to 5 minutes. Season with salt and pepper to taste.

Reheat the sauce, season generously with pepper and more salt, if you like, and pour it over the ribs. Scatter the leeks over the top and serve.

Author's Note Although I usually season short ribs with salt as well as pepper before browning them, you won?t need salt here. The soy sauce seasons the ribs well and produces an intense sauce that?s balanced well by serving them with Lucia's Best Mashed Potatoes. 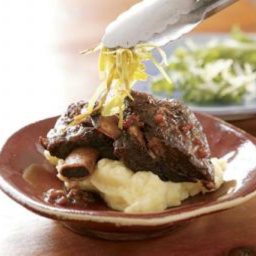 billsmith
&#013;&#010;Author's Note&#013;&#010;Although I usually season short ribs with salt as well as pepper before browning them, you won?t need salt here. The soy sauce seasons the ribs well and produces an intense sauce that?s balanced well by serving them with Lucia's Best Mashed Potatoes. [I posted this recipe.]
10y
Reply
Reply