I copied this verbatim. I have no idea whole the character cook this is but I typed it down exactly as it was written.

Wash the beets, just to remove any dirt. Get a large pan of water boiling. Toss int he beets and boil gently until tender - you should be able to skewer on through without too much resistance. For an average sized beet - this might take around 30 to 40 minutes.

When the beets are cooked, remove from the water, and let them cool just enough to touch. Rub each beet with a towel to remove the skin. This is best done when the beet is really pretty hot - the skin comes off far easier. Sure, you might burn your hands, but it is worth it. Allow the beets to cool.

Once the beets are cool, break out the mandolin slicer. Set it to perhaps the thinnest setting, and start slicing the beets acrossways.

To assemble - lay the slices of beet out on a plate. Sprinkle the garlic and parsley over the beets. Do the same with a little sea salt. I find it is far more effective to do this from a great height - you get a much more even spread that way, instead of concentrating your seasonings in one spot. Don't get all flouncyJame Oliver with it though!

To finish, drizzle a good glug of sherry vinegar over, and then do the same with the olive oil.

Let it sit for ten minutes to let the flavors swap phone numbers.

This is best made around the time you want to eat it. I find that boiled beets can last a couple of days in the fridge no problem, but doing so with them sliced isn't a great idea, they loose some texture that is for sure. I make this salad to take to work, and just hike along a whole beet and my Japanese slicer. Sure I might look like a prat in the office kitchen, slicing up the beets, but it is worth it. Let your office workers eat their twinkies and make jokes. 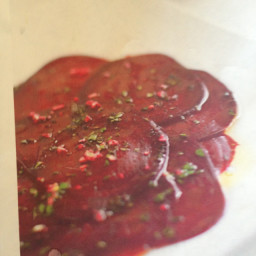