Hibachi and teppanyaki are two Japanese styles of cooking; they are often confused. Teppanyaki is a style of Japanese cuisine that uses an iron griddle to cook food as seen in the photo. Hibachi is a grill, but is commonly used in Japanese-American steakhouses to mean "teppanyaki". Try this Benihana Hibachi Chicken and Hibachi Steak recipe, or contribute your own.

When the chicken has sauteed for about 2 minutes or when it appears white on all sides, slide the meat to one side of the pan, pour lemon juice on it, then add the mushrooms to the other side of the pan. Pour 1 tbsp of the soy sauce over the mushrooms, then add 1 tbsp butter plus a dash of salt and pepper. Continue to stir both pans. After 6 to 8 minutes, or when the chicken is done, sprinkle 1 tsp sesame seeds over the chicken, then mix the chicken with the mushrooms. Spoon the chicken mixture in 4 even portions on 4 plates next to 4 even portions of the vegetables from the other pan. Pour the bean sprouts into the same pan in which you cooked the vegetables and cook over high heat. Add 2 tbsp soy sauce, 1 tbsp butter and a dash of salt and pepper. Cook the sprouts for only a minute or two, or until they have tenderized. Just before you serve the sprouts, sprinkle 2 tsp sesame seeds on them. Serve the sprouts next to the chicken and vegetables with mustard sauce and ginger sauce on the side. 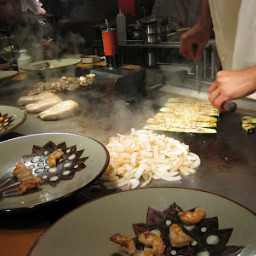 shanewing
WOW. I made this with sirloin. minus the bean sprouts. I served it with short grain rice and some of that lovely "japanese steakhouse" sauce (which really just amounts to ketchup and mayo). I couldn't make this any better if I tried.
8y
Reply
Reply

hgStarTrend
One question: why is this called "...and Hibachi Steak?"
10y
Reply
Reply