Try this Bill's Cajun Jambalaya recipe, or contribute your own.

2- Brown chicken but don't over cook, remove from pot add pork cook on high until all moisture is evaporated. Brown pork on medium high don't stir to much allow meat to seer and brown crust (gratin) is formed on the bottom of pot when it's has a good brown color but not scorched add small amount of water to unstick (gratin) do this several times to get a nice rich brown color. Add sausage cook just long enough to heat sausage do not over cook it tends to dry and cook the flavor out.

3- At this point you can remove the sausage and pork if you don't take the meat out drain most of the grease out add onions and cook until clear, Add rest of the vegetables except green onion and liquid seasons stir frequently don't let it stick cook until all moisture is evaporated if you removed the meat put it all back in if you didn't remove the pork and sausage add the chicken, simmer taste occasionally when the flavors blend, add water green onion and chicken base bring to rollin boil taste to adjust your seasoning if needed, it should be a little more salty than would normally eat. Add your rice bring back to a heavy boil stirring occasionally once the water is at heavy boil turn the fire as low as you can with going out stir constantly until rice is starting swell, Put lid on lid do not remove for 25 minutes make sure your sure your fire stay low as low as possible with out going out 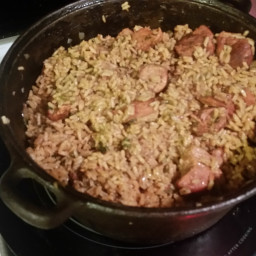 scobb297
This is for real. I love jambalaya and this is the way it should be...the flavors are perfect. Thanks Bill!
5m
1 reply

btemplet 3m
Thanks man where are you. Bill
Reply