Eggnog is great around the holidays, but homemade eggnog is even better. Despite common misconceptions, made-from-scratch eggnog is not difficult or time-consuming. This eggnog with bourbon recipe will show you just how easy and delicious eggnog can be and you can use it to keep the holiday tradition alive.

Eggnog is typically made with eggs, sugar, spices, and a base liquor (traditionally rum or brandy) and there are many eggnog recipes available. The origins of eggnog can be traced back to the 17th century and it has been a Christmas favorite ever since.

A whiskey-based eggnog like this one is best with a good, spicy bourbon. The flavors of the bourbon pair well with the holiday spices and create interesting layers of flavor. This recipe also features a little cognac and brandy-based orange liqueur (e.g., Grand Marnier) to create even more dimension. In many respects, this is not your average eggnog.

This recipe is straightforward to make and is far better than any prepared eggnog you will find at the market. It is delicious, flavorful, and a great way to impress friends and family during the holiday season.

Steps to Make It

Note: It's strongly recommended to make this eggnog a day before you need it. The extra time allows all of the tastes to marry and become one delicious and impressive drink.

Blend the eggs for 1 minute in either a mixer fitted with a whip attachment or a blender.

Add the sugar and spices and blend for an additional 30 seconds to incorporate.

Slowly add the liquors and blend another 30 seconds.

Add the milk and cream and blend 1 minute more.

This eggnog recipe will yield about eight 4-ounce drinks. If you want more, simply double or even triple the recipe.

Portion out 4 ounces of eggnog into a champagne flute or teacup.

Grate fresh nutmeg or cinnamon over the top (optional).

Are You Worried About Drinking Eggs?

Millions of people have survived drinking eggnog and other egg drinks and it is very rare that anyone gets sick from the eggs alone (eggnog-induced hangovers do not count!). However, it is understandable if you're a bit wary of drinking raw eggs. Put your mind at ease and know that there are a few things you can do to make sure your eggs are safe. If you like, you can even choose an egg substitute (though the drink really isn't the same).

If the thought really does bother you, skip the eggnog completely! There are many other traditional Christmas drinks that you can mix up instead.

Pour a vanilla liqueur instead of the orange liqueur.

How Strong Is This Bourbon Eggnog?

We often hear the horror stories and running jokes about someone having a little too much eggnog at the Christmas party. It may surprise you to learn that the average eggnog is actually quite light (unless, of course, you add too much liquor). 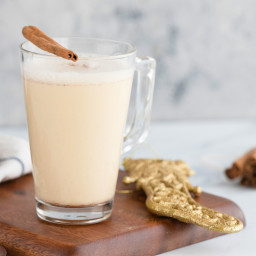