In a medium bowl, mix the marmalade, maple syrup, mustard, bourbon or rum, and lemon juice. Season to taste with salt and pepper.

Position a rack in the lower third of the oven and heat the oven to 325°F. Brush the ham all over with 1/2 cup of the glaze and wrap loosely in foil. Put it on a large rimmed baking sheet and bake until an instant-read thermometer inserted into the center of the ham registers 125°F, 17 to 19 minutes per pound, for a total of 2-1/4 to 2-3/4 hours. (The ham will continue to rise in temperature during the glazing and resting.) Remove the ham from the oven and raise the oven temperature to 425°F. Peel back the foil from the top and sides of the ham; brush the ham with 6 Tbs. of the glaze and return it to the oven. Bake, brushing the ham again after 5 and then 10 minutes, using 6 Tbs. more glaze each time, until the glaze is shiny and golden, about 20 minutes total (keep a close eye on the ham so that the glaze doesn't burn).

Remove the ham from the oven and tent loosely with foil. Let rest at least 20 minutes and up to 2 hours before slicing.

Orange-maple mustard: Reserve 3 Tbs. of the marmalade mixture from the Bourbon-Orange-Glazed Ham recipe and mix with 1 cup of grainy mustard. 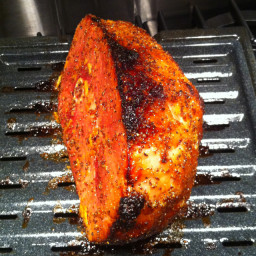 ThaleD
Made this for Easter dinner, including the suggestion for mixing left-over marinade with mustard to serve along side. A very good recipe that I will definitely make again.
9y
Reply
Reply