There are four basic steps in this recipe: Caramelize the onions, then deglaze the pan with a bit of broth. Next, brown the chicken thighs and deglaze that pan as well, with a little more broth. Combine the onions and the chicken, with their respective sauces, and bake in a slow oven for half an hour. Then take off the lid, and broil with Gruyère. Eat with some good bread and a salad!

The chicken turns out succulent and tender, and it's nestled into a bed of rich, aromatic onions, spiked with tangy mustard. There is more than enough sauce to smother the chicken, and you could even eat it separately as a very rich soup.

This is such an easy dish. It takes some time to put together, though — primarily because of caramelizing the onions. Caramelizing onions, however, is a great do-ahead step. You could caramelize the onions on a Sunday night, or even prep the entire dish — then bake after you get home from work.

It pretty much goes without saying that this dish makes fantastic lunch leftovers, too. It would also freeze magnificently. 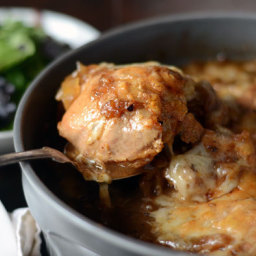