Cooking lamb shanks uncovered in their broth simultaneously browns and braises them, adding richness and color. Braise them a day ahead; the flavor will deepen overnight in the fridge

LAMB SHANKS: Place lamb on a large rimmed baking sheet; season all over with 2 Tbsp. salt and generously with pepper. Mix rosemary, fennel seeds, and grated garlic in a small bowl; massage into lamb. Cover and let stand at room temperature for 1 hour or, preferably, chill overnight.

Add minced garlic, flour, paprika, and red pepper flakes. Stir vigorously to distribute flour. Cook, stirring often, until mixture becomes dry, about 1 minute. Add tomatoes and wine. Simmer briskly, stirring often, until juices thicken and tomatoes begin to break down, about 10 minutes. Gradually stir in 4 cups broth. Simmer until flavors meld, 3-4 minutes. Season to taste with salt and pepper. Add lamb shanks to pot in a single layer, pushing them down into sauce (add additional broth if needed so that shanks are about'/ submerged).

Roast, uncovered, until tops of shanks have browned, about 30 minutes. Using tongs, turn shanks over and roast 30 minutes longer.

Cover and cook, turning shanks occasionally, until meat is fork-tender and almost falling off the bone, 45 minutes

to 11/2 hours (time will depend on size of shanks). Remove from oven and skim off fat from surface of sauce. Let shanks rest in liquid for at least 30 minutes. DO AHEAD: Lamb shanks can be made 1 day ahead.

Refrigerate uncovered until cold, then cover and keep chilled.

for 11/4 hours. Stir in cheese and butter and season with pepper. Smooth top and continue baking until polenta is set and jiggles like custard, 25-30 minutes.

Meanwhile, discard any fat from surface of lamb shank mixture and bring to a simmer over medium heat. Cover, reduce heat to low, and simmer gently, occasionally turning shanks and stirring sauce, until heated through, about 20 minutes. If using large shanks, remove from pot; let cool slightly, then coarsely shred meat from bones. Return meat to sauce. (If you have 8 small shanks, you can serve them whole, setting them directly atop polenta.)

Preheat broiler. Broil polenta, watching very closely to prevent burning, until surface is light golden, 5-7 minutes. Serve immediately for a softer polenta; for a firmer texture, let rest for up to 30 minutes.

GREMOLATA AND ASSEMBLY Using a sharp

knife, mince parsley (make sure it's dry). Mix parsley with remaining ingredients in a small bowl; toss to evenly incorporate. 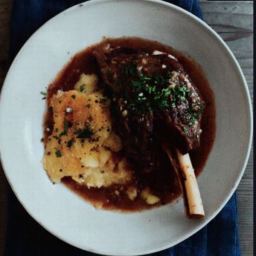