Try this Bread Pudding recipe, or contribute your own.

Preheat the oven to 350F degrees. Put the cubed bread crumbs in a large bowl; set aside. In a medium bowl, combine melted butter, milk, beaten eggs, brown sugar, raisins, cinnamon, and vanilla. Pour mixture over bread and set sit for 45 minutes, giving the bread an occasional stir. Butter a 9 x 13 baking dish and transfer the bread and any liquid into the butter dish. Bake, uncovered, for 40 minutes. Remove bread pudding from oven and let cool on rack for 20 minutes. 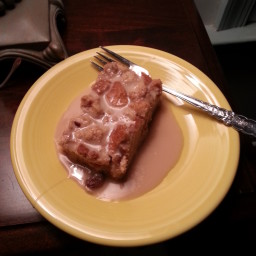 AntoniaToni
I have tried many bread pudding recipes but this one is my husband's favorite. And my favorite as well. One can easily adjust it to their taste.
4y
Reply
Reply

ladyhoffman
Hubby and I both love this! Made it using Alpine Valley bread and whole wheat hamburger buns. Rich, so cut it into 16 pieces. Delicious!
5y
Reply
Reply