The combination of focaccia, cheese and roasted red sweet pepper topped with cooked ham slices and scrambled eggs is sure to wake up and wow friends and family with its unexpected blend of flavors.

Meanwhile, with a whisk or fork, in a medium bowl, beat eggs, water, salt and pepper together until combined. In a 10-inch skillet, melt butter over medium heat. Pour egg mixture into skillet. Cook, without stirring, until mixture begins to set. Cook for 4 to 5 minutes more or until eggs are cooked through but still moist, lifting and folding often to assure eggs cook evenly. Remove from heat; keep warm.

To assemble focaccia, broil cheese-topped wedges or squares for 2 minutes. Top each with 2 slices of ham and some of the scrambled egg mixture. Spoon some of the Asiago Cheese Sauce over each wedge or square. If desired, garnish with additional snipped rosemary or parsley. 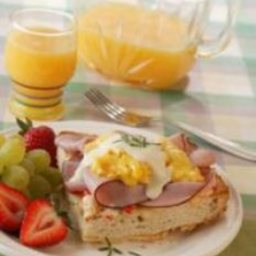