I found this recipe at the website Cooking with Family and Friends, altered it using my own brisket and beans recipes, and it was a hit. Cook your brisket and beans over the weekend and use the leftovers to make brisket tacos on a busy week night. These tacos are delicious with combination of the tangy barbecue sauce and the crunchy onion strings. I like to marinate the brikset on Saturday and bake it on Sunday since it needs to marinate for about 24 hours.

Combine broth, lemon juice, soy sauce and liquid smoke in a small mixing bowl and stir to mix well. Place the brisket, fat side up in a 9 x 13 baking dish and pour the marinade over the top of the brisket. Sprinkle the entire top surface of the brisket liberally with the Montreal Steak Seasoning, cover with foil, and marinate in the refrigerator for about 24 hours. Preheat the oven to 300 degrees and place the covered brisket on the middle rack of the oven. Bake for about 50 minutes per pound (2 hours and 40 minutes for a three pound brisket). The meat should be fork tender.

Let the meat rest for about ten minutes, and then transfer it to a cutting board and slice against the grain. Using two forks, shred about two cups of the brisket for the tacos. Set the shredded meat aside to cool, and drizzle a tablespoon of the marinate over it. After the meat cools, refrigerate it or freeze it to make the tacos.

While the brisket is cooking, get the beans going. These are easy! Sort and rinse a pound of pinto beans and place them in a 3.5 quart slow cooker. Cover the beans with enough water to come about three inches above the level of the beans. Add the salt, ground cumin, bouillon, and dried onion to the beans and stir to mix well. Cover and cook on high for four hours, and then reduce to low and cook about 2 hours longer, or until beans are tender. When the beans are done, and have cooled, put about 2 1/2 cups (use very little of the juice) in a lidded container and freeze or refrigerate until ready to make the tacos. Enjoy the rest of the beans with the sliced brisket.

On the day you are going to make the tacos, be sure you thaw out your meat and beans if you had them frozen. Combine the shredded brisket with the barbecue sauce and place in a small crockpot or lidded sauce pan and begin heating the mean on low. If you''re using a crockpot, you don''t have to stir the mixture often, but if you''re using a saucepan, you should stir it fairly often unless it''s on very low heat. After it''s heated, you can place it in a warm (not over 170 degrees) oven to keep it warm while you''re making the beans and tacos.

Fry the tortillas in butter as directed on the package, or until they bubble up and begin to get golden brown, flip them over and brown them on the other side, and wrap in paper towels to keep them warm and soft. Place in the warmed oven. I use a large electric skillet to cook the tortillas so I can do two tortillas at a time.

Pour oil into a medium non-stick skillet. You want about 1/4 inch of oil in the bottom of the skillet. Slice onion, seperate into rings, and cut rings in half. Combine egg, milk, and sugar in a small bowl, stirring to disolve the sugar. Combine flour and remaining seasonings in another small bowl, stirring to mix well. Dip onion strings into the egg mixture and then into the flour mixture, and place on a piece of wax paper or a plate. Heat oil, and when it starts getting hot, drop an onion string into the oil. When the oil is hot enough, the onion will sizzle. Add about half of the onion strings to the hot oil, and fry until they are golden brown. Remove them from the grease with a slotted spoon or spatula, and put them on a plate lined with paper towels to drain. Repeat with the remaining onion strings. Sprinkle lightly with salt, if desired. Place them in the warm oven.

Mash the beans. I like to use a potato masher. You want to leave a few of the beans whole - don''t mash them until you have mush. Place the lard or bacon grease in a small non-stick skillet and heat until the grease melts. Add the mashed beans and cook until they bubble and reach desired consistancy, stirring often - they will get more stiff the longer you cook them. When they are done, top them with some of the cheese. The cheese will melt as the beans cool.

Assemble your tacos and eat! Put a few tablespoons of the brisket in the middle of a flour tortilla, add some cheese, and then some onion strings. Serve with the refried beans, and ice cold beer. Bueno!

You can add 1/2 teaspoon of red pepper flakes to the brikset and sauce before warming it for a little extra kick. 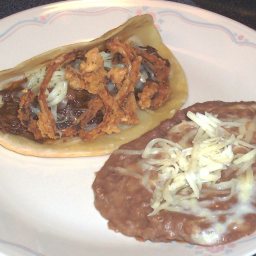 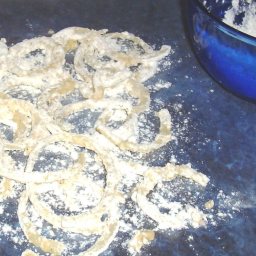 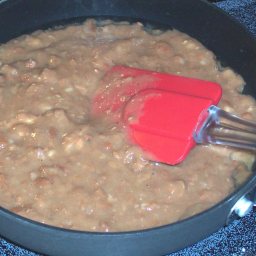 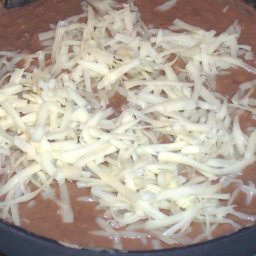 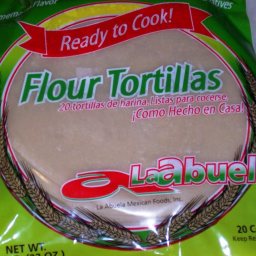 This is the type of ready-to-cook tortillas we like to use. They are very fresh tasting. 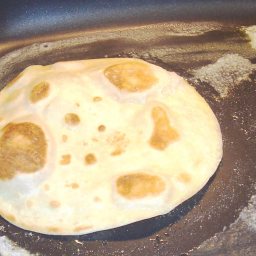 Beachbumette
[I made edits to this recipe.]
11y
Reply
Reply

Beachbumette
You can add 1/2 teaspoon of red pepper flakes to the brikset and sauce before warming it for a little extra kick. [I posted this recipe.]
11y
Reply
Reply