How to make Brussels Sprout Slaw with Maple-Bacon Roasted Pecans

Place the bacon on a baking sheet (I like to cover it in tin foil for easy cleanup) and cook until crisp, about 15 minutes, until crisp. Set the bacon aside to cool.

Remove all but about a tablespoon of the bacon grease.

Toss the pecans and 2 tablespoons of maple syrup in with the bacon grease and put the baking sheet back in the oven for 10-15 minutes, shaking halfway, until the nuts are crispy and fragrant. Allow to cool.

Stir in the shredded brussels sprouts until coated.

It won’t seem like enough dressing at first but the sprouts will wilt a bit and let off some liquid. Toss in 1/2 cup of the pecans and crumble the bacon in.

Mix and refrigerate. Can be eaten right away but it is better the longer it sits. 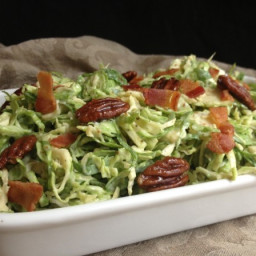