Spray a large skillet liberally with cooking spray and heat over medium. Saute onion until tender, 8-10 minutes. Add garlic and saute briefly, until fragrant. Stir in cinnamon, turmeric and saffron for about a minute, then sprinkle sprinkle flour and stir for another minute. Add broth and bring to a simmer.

Season chicken with salt and pepper and add to broth. Poach chicken in simmering broth (reduce heat if needed to prevent overboiling), uncovered, until cooked through, approximately 15 minutes. Add chopped apricots. Remove chicken to a plate and allow to cool just until you can shred it. Shred coarsely and return to skillet.

Continue to simmer until sauce thickens and covers chicken thickly, about 10 minutes. Stir in parsley and lemon juice. Taste and adjust seasoning with salt and pepper as needed. Remove from heat and allow to cool while you prepare the phyllo.

Take 6 sheets of phyllo and cut them in half, giving you 12 half sheets. You will use 3 half-sheets for each ramekin.

Lay one half-sheet of phyllo on work area and spray lightly but completely with butter flavored cooking spray (alternatively, brush with melted butter). Gently press into the bottom of your ramekin, allowing ends to flop over sides. Lightly sprinkle with a spoonful of almond mixture. Spray another half-sheet and press into ramekin in the opposite direction of the first one. Lightly sprinkle with almond mixture. Spray one more half-sheet of phyllo and press into the ramekin, whichever direction you prefer. Repeat with remaining ramekins.

Using a slotted spoon, divide chicken mixture among your ramekins. Fold ends of phyllo over top and press to seal. Sprinkle lightly with almond mixture. Place ramekins on a baking sheet and bake in oven for 10-15 minutes until phyllo is golden brown. 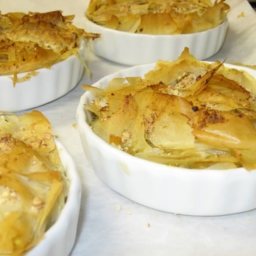 Mdeninno
Artful & delicious. I added a little madras curry to it too!
12y
Reply
Reply

digigirltx
I made mine as individual pies in 5? ramekins, but you could do this as one single large pie, as little mini pies using a muffin pan, or even just fold little envelopes with your phyllo and make hand-held pies. [I posted this recipe.]
13y
Reply
Reply