A kicked up version that can be hot or not depending upon how much blacken you add.

1. Cut sausage into 1/2" chunks. Get some oil going in the pot you'll be cooking everything in, and brown the sausage. Remove from the pot. I use an 8 quart pot.

2. While the sausage is cooking:

Cut the chicken into chunks, 1/2 at a time (you don't want to crowd the pot, or the chicken will steam instead of brown) and brown in the same pot, adding additional oil if you need it. Remove the chicken and reserve with the sausage.

3. While the chicken is cooking, you can start chopping the vegetables. "Charlie Pepper" is a real hot Thai.. pepper that has a 25 minute afterburn. I'm sure you don't have a plant, so you can use dried peppers that or thinner than a pencil and about 2" long. Just put them in a blender and blend with enough water to make a puree", then add it to the pot. Turn the pot down to a medium heat, add additional oil, if needed, and dump in the vegetables.

Cook the vegetables over medium / high heat, covered, until they're soft.

4. Add the tomato paste and stir until it's all incorporated. Add the sausage and chicken back into the pot, then the tomatoes and simmer for about 45 minutes. Or, until the meat is cooked through.

5. At this point, you can either continue, or, turn off the heat, and finish it off the next day, or later, if you've gotten finished too early.

6. Either the next day, Later, or, as the next step. Bring the pot back to boiling

7.Wash the rice well to get rid of the excess starch that's on the outside of each grain. I do this by placing it in a fine meshed strainer, holding it under running water, and stirring it with my hand until the water runs clear, then add to the pot along with the chicken broth.

8. Bring it back to a boil, add the shrimp, bring it back to a boil, then turn down to simmer, covered. Cook for an additional 25 - 30 minutes stirring every once in a while to keep the rice from settling on the bottom and sticking. Taste the rice to make sure it's done. let it rest for a few minutes, then serve. Don't worry if the rice hasn't absorbed all the liquid, the resting will give it a little more time to soak into the rice.

9. If you have any left over, don't try to freeze it, I don't think it'll freeze well because of the rice. I save the left overs in plastic storage containers in the refrigerator. To reheat, place the Jambalaya in a pot, add a little water, and simmer for about 10 minutes. It'll come out as good as the first time you had it.

10. Butt Kickin' Blacken contains neither salt nor sugar, and is available at www.capnrons.com?ID=BO. 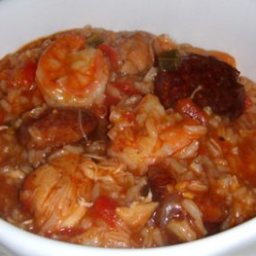 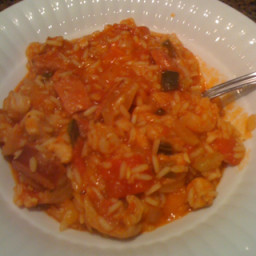 che4u
Good but exceedingly hot, even when leaving items out. I will try again, though, with even less spice and see if I can make it pass the family test.
9y
Reply
Reply