I asked an Indian friend of mine to show me a curry she grew up making. This is the result... kind of. Deceit isn't actually required to make this dish, but it helps.

DISCLAIMER: I don't deal with measurements. Those indicated above are just guesses. Use your intuition and change it based on your own preferences. There's no right way to do this sort of thing (in my opinion).

In a large heavy pot (or wok) sauté a bunch of garlic (probably a whole bulb), 1 big piece of grated ginger, a handful of green onion and one large red onion in some butter. Add a couple big spoons of orange juice concentrate. When onion is kind of translucent, add some whole cumin (2 tablespoons maybe?). I’d dry roast the cumin first. My friend later claimed that she never uses cumin. I swear we put in cumin when she showed me and I like it. Anyway, that's where the horrible filthy LIES come into this recipe.

Throw in some parsley. Ok, fine... she told me cilantro but cilantro tastes like hobos so I use parsley.

After that, add 1 tsp hot chile powder, 2 or more tbsp of garam masala, oneish tbsp on turmeric, 1 tbsp or so of paprika, 2 or more tbsp of curry powder, salt and pepper. You have to screw around with the spices until it smells right. What’s right? I dunno…

Of course, the chile should be adjusted to your preference. Don't bother with the dark red stuff for making chile. Use the red hot stuff from an Asian supermarket.

Add some water… umm just enough to make it goop.

This mixture will now be referred to as the "spice pot".

You should have cubed a bunch of chicken at this point, breast or thighs. Dump the chicken into the spice pot. Stir.

In a separate pot (on very low heat), add 3-4 of the little cans of regular tomato paste. Add some curry juice from the spice pot into the tomato pot. Keep adding juice until the paste is less… uh... pastey.

After that, pour in cream (or yogurt... or both!) until its at the right consistency. Not too thick, not too thin. Somewhere in between and slightly viscous.

Once the chicken in the spice pot is cooked add the tomato paste/cream mixture and stir. Screw with the spices until it tastes the way you like.

Put in a large bowl for serving and throw a little parsley on top.

Serve with Saffron rice and some yogurt or a mint and cucumber raita.

Seriously, you can't screw this up. If you don't like the way it's tasting, change something. I find it's different each time but always good. 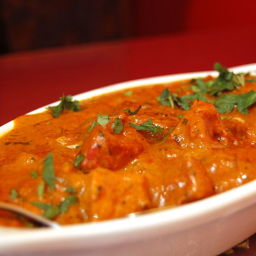 Samalama4
Very tasty recipe. I was beginning to think curries were my culinary kryptonite, but this recipe is easy to follow and, as the author says, difficult to screw up. The flavours go great together and even though I didn't have some of the ingredients (no turmeric, asian hot chile powder, or cilantro...ehem...parsley), I found it worked really well. I only substituted a jalapeno for the chile powder to give it some kick and that worked great! I also reduced the amount of cream used (to about 175 mL) and think in the future will reduce the paste to get a better cream-to-tomato ratio. Awesome recipe!
11y
Reply
Reply