Try this Butterflied Baked Shrimp recipe, or contribute your own.

Preheat the oven to 400 degrees F.

Spread the bread crumbs evenly on a baking sheet and toast in the oven until golden brown, about 10 minutes. Watch them carefully as they burn very quickly. Remove from the oven and cool. Raise the oven to 500 degrees F.

Mix together the oregano, thyme, parsley, basil and garlic. Add the garlic herb mixture to the bread crumbs and mix well. Season with salt and pepper.

Brush a large oven proof skillet with some of the melted butter, coating the bottom well. Dip the shrimp in the butter, opened side down, and then dredge in the bread crumbs, pressing so they stick. Place the shrimp, bread crumb side up, in the skillet in 1 layer.

When all of the shrimp are in the pan, drizzle the top with a little more of the melted butter. Bake for about 5 minutes, or until the shrimp are just cooked through and the bread crumbs are golden brown.

Toss the arugula with the olive oil and lemon juice and season with salt and pepper. Divide the arugula among 4 plates. Place 4 shrimp around each pile of arugula. Drizzle with more butter, if desired, and serve with lemon wedges. 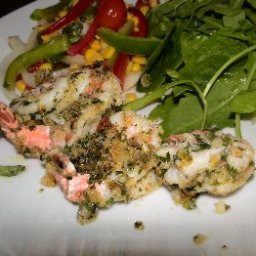 cleverkt
Everyone loved these - even the little boys who treat chopped up herbs like they might carry the plague... Easy, tasty and seriously worth adding into a regular menu plan!
14y
Reply
Reply

cleverkt
[I made edits to this recipe.]
14y
Reply
Reply