Try this Butternut Squash and Pear Soup (With Cashew-Tarragon Ceam) recipe, or contribute your own.

This is a recipe out of the Bay Area Vegetarian 1996 magazine I also posted information about. Ihave not tried this recipe, but it comes from a source that I respect. The recipe is from Millenium restaurant, a fabulous VEGAN restaurant in San Francisco that serves gourmet food that follows McDougalls precepts. Says so right on the menu! Ive eaten there twice and love it. Saute onion, carrot, and celery in the sherry. When onions are soft, add half the salt and pepper plus all the remaining ingredients. Simmer until the squash is soft (approximately 45 minutes). Puree the soup in a blender. Return it to the soup pot; simmer10 more minutes to marry the flavors,and then adjust salt and pepper. Serve garnished with cashew tarragon cream and slices of pear. Cashew Tarragon Cream: Blend all ingredients in a blender. Start with half the water, and add the other half as it blends (you may need a little more than 2 cups). You are looking for the consistency of heavy cram with no lumpiness. Nutritional Analysis: Per cup: 130.9 calories (Kcal), 12% calories from fat, 4.5g protein, 25.5g carbohydrate, 1.9g total fat (.3g saturated fat), 98.5mg calcium, 2.mg iron, 671.6mg sodium, 5.0g dietary fiber. I would assume that most of the fat in this dish comes from the sauce, so you could play with that recipe a little or skip it altogether. Posted to fatfree digest V96 #284 Date: 15 Oct 96 02:52 GMT From: FINNIGAN@applelink.apple.com (Finnigan, Julie) 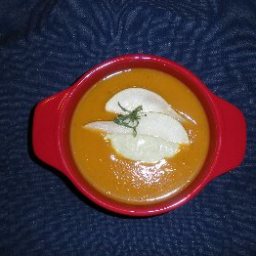 oakandsage
I was not too sure about the cream when I tasted it by itself but it went very well in the soup, making it richer and more filling. The dish was a hit.
6y
Reply
Reply

TallTango
This delicious soup has so many wonderful flavors and aromas. There is a lot of chopping involved, but it's well worth it. I doubled the recipe so there was plenty for dinner as well as some left over to savor for a couple more meals. It doesn’t take too much longer to double the recipe, and then you have much more to show for your work and more soup to enjoy!
11y
Reply
Reply