- Cut both ends off the whole squash using a sturdy knife. Be careful not to force it and cut your fingers!!! A little finessing goes a long way.

- Next, cut the squash length-wise, and scoop out the soft part with the seeds.

- Brush some olive oil on the inside of the squash and place both sides face down in a cookie sheet.

- While you're waiting separate the squash seeds from the pulp and spread out in a single layer on parchment paper to dry. You can toast these in a skillet right before you serve the soup as a topping.

- When squash is done, peel off the skin and cut the squash into chunks. If you have a scale, measure out 1 1/2 pounds and set aside. If you do not have a scale, it is about 2 cups of squash.

- In a large pot, saute butter and onion until softened, about 5 minutes.

- Add celery and leeks, saute for about 5 minutes, until softened.

- Add the chicken broth, squash, cumin, ginger, cinnamon, nutmeg and chili flakes and bring to a boil. Then lower the heat and simmer for about 10 minutes to allow the flavors to come together. Add salt and pepper to taste.

- Take the pot off the stove. If you have an immersion mixer, use this to puree the ingredients to a smooth soup. If not, carefully put the ingredients into a blender a little at a time and puree until smooth.

- Finally stir in the half-and-half to give it a bit of a more creamy texture.

- In a skillet, simply put in the squash seeds and toast over medium heat. Be sure to use a cover as the seeds will pop. Also, keep the seeds moving around in the skillet so they don't burn. When the seeds get a nice toasty dark color in the center they are done.

- using the other half of your leek, slice thin rounds of only the white and light green parts.

- Separate the rings so that they are mostly in individual pieces.

- In a skillet, add a little vegetable oil (not olive oil as it has a lower smoke point) and leeks and sprinkle with a little salt and freshly ground pepper.

- Cook the leeks until they are browned and crispy.

Top the soup with either one or both toppings and enjoy! 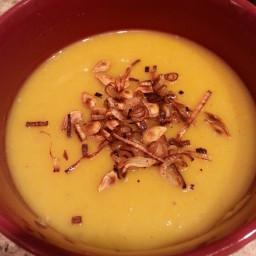