Try this Caipirinha (Classic Brazilian Cocktail) recipe, or contribute your own.

You will need a jug, because you are going to make a jugful. Chop several limes roughly, into eighths, say. Crush the lime pieces and throw them along with their juice into the jug. Add crushed ice, white sugar and plenty of rum. Stir well and serve immediately, lime pieces and all. Important note:

The rum should be Brazilian rum ("Pinga" or "Cachac,a", ie. cedilla on the second c, some brands are Velho Barreiro, Pitu, Casa Grande, Tatuzinho) and the limes should be limes. Cachac,a has a very different taste from, say, Bacardi, apparently because it is only refined once so contains esters and other compounds that are removed by more distillation (thats a story I've been told, anyway.) 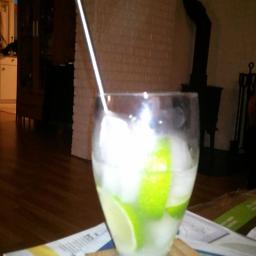