Try this Chargrilled Tuna with Salsa Verde recipe, or contribute your own.

You can make the salsa verde some time in advance, while hand chopping all the ingredients on a board gives the sauce has plenty of rugged texture.

If you use a food processor, don't turn it on for too long.

Chop the parsley, mint, capers, anchovy fillets and garlic together. Scoop them into a bowl and stir in the mustard, lemon juice, olive oil and 1/2 tsp salt.

If you're going to barbecue the tuna, make sure you light it a good 40 minutes before cooking them. Brush the tuna steaks on both sides with some oil and season well with salt and pepper.

If you're using a ridged cast iron griddle, place on a high heat and heat until smoking hot before drizzling with oil. Cook the tuna for a minute either side until marked with bar marks but still pink and juicy in the centre and spoon some salsa verde on top.

Serve with either the Melange of Early Summer Vegetables or a bowl of roughly cut chips.

Stir in a small bunch of flat leaf parsley sprigs, halved chive stalks and dill sprigs. When they have just wilted down, season with a little salt and pepper, and serve. 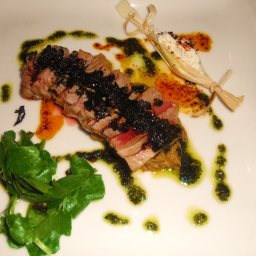 This was very Good, i dint use the anchovy paste, and it was still very easy and good, this is my Photo, not my recipe, CCheryl