Try this Cheese Stuffed Shells recipe, or contribute your own.

Preheat oven to 350. Lightly oil a 13 X 9 inch shallow casserole dish. Bring a large pot of water to boil. Add jumbo shells a few at a time, stirring after each addition, so the shells stay separate while cooking. Return to a boil and cook, uncovered, 8 to 10 minutes or until just firm-tender. Do not overcook. Drain and cool in a single layer on a sheet of waxed paper to prevent shells from sticking together. Wash spinach well in lukewarm water to remove grit. Cook in a medium nonstick skillet in just the water that clings to the leaves, tossing just until wilted. Wrap in a paper towel and press out the moisture. Finely chop cooked spinach. Beat the eggs in a large bowl. Add spinach and stir until combined. Add ricotta, mozzarella, 1/2 cup of the parmesan, parsley, salt and pepper and stir until all ingredients are well combined. Fill each jumbo shell with 1 1/2 TBS of the spinach mixture. Pour 1 cup of the pasta sauce in the bottom of prepared casserole dish. Arrange the shells in one layer. Spoon over the remaining sauce. Cover loosely with foil. Bake 30 minutes. Remove foil and sprinkle with remaining 1/4 cup of parmesan cheese. Bake, uncovered, 5 minutes, or until cheese is melted. Recipe by: Susan Sassaman Claessens 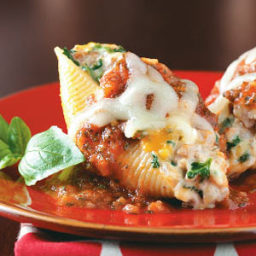 suedzik-davidsz
Had to bake it longer.
4y
Reply
Reply

millissamarie
Good thing I am smart enough to figure out what to do with the ricotta... perhaps they should look this recipe over...
6y
Reply
Reply

jamiecook1232
I loved it the first time I tried it. Then got brave and added sausage and mushrooms to the mix. The guys at the fire house now make it a weekly request lol.
6y
Reply
Reply

cathmariep
This was very good. I thought that 3 egress was going to be to much, but it turned out to be perfect. Along with the parmesan cheese, I sprinkle some extra mozzarella cheese on the top for the last few minutes while baking.
6y
Reply
Reply