Simple and easy to do, this recipe will taste like you're eating in a very expensive restaurant

1. Place the Cherry Preserves in a sauce pan over medium heat until it melts. Add the Blacken and Vinegar and stir it up good. Let this simmer for about 5 minutes.

2. Blend with a food processor, blender, or with an immersion blender (like I did). The whole cherries will help thicken the sauce.

3. As it cools, it'll thicken because you've boiled off some of the water in the preserves, this is when you add the port wine. Add enough so that you've got a nice basting sauce. Set this aside while you cook the Pork.

4. Pork Tenderloin normally comes 2 / pkg., Separate them, rinse, then remove the silver skin, and any grizzle that might be there. The ones that I had also had a piece on the end that I removed, in order to make each piece more uniform in size.

Lightly season the Pork with about 1 teaspoon of Butt Kickin' Blacken per tenderloin.

5. I use a thick cut bacon, this time it happened to be coated with black pepper. I removed most of the pepper, then toothpick 3 slices bacon per tenderloin, in a spiral, leaving about 1" in between each slice as it wrapped around. I didn't put any additional seasoning on at this time, because the bacon already had plenty of pepper to it, and the bacon would provide the salt.

6. Cook on a medium grill until the meat reaches an internal temperature of 140 - 145 degrees. The meat should be barely pink inside, and will be real moist.

Begin basting with the Cherry Glaze, about 15 minutes before they're done.

When it's done, place it on a platter, cover with aluminum foil, and let it rest about 15 minutes before carving. When carving, slice it into 1/2" slices on an angle to give larger pieces.

Be sure to remember to remove the toothpicks when carving, and try to cut all the way through in one slice of the knife. Otherwise you might end up with jagged slices

Butt Kickin' Blacken Blacken contains neither salt nor sugar and is available at http://capnrons.com/index.html?ID=BO_2_2011 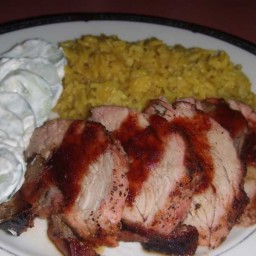