1. To prepare broth, combine first 7 ingredients in a large stockpot; bring to a boil. Reduce heat to medium-low, and simmer 2 hours, skimming as necessary. Remove chicken from broth; cool. Remove meat from bones. Shred meat; set aside. Discard bones. Strain broth through a sieve over a bowl; discard solids. Place broth in a large saucepan; bring to a boil. Cook until reduced to 6 cups (about 8 minutes). 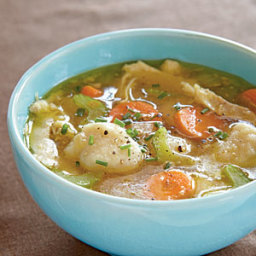