Try this Chicken Breasts Cordon Bleu recipe, or contribute your own.

Flatten breasts with rolling pin, rolling between waxed paper until thin. Sprinkle with salt and pepper. Put 1/2 slice ham and cheese on each piece, tuck in sides and roll like a jelly roll. Fasten with toothpicks. Combine egg and water and beat well. Combine crumbs, Parmesan and flour. Dip chicken in egg, then in crumbs. Fry in about 1 inch oil on medium heat until brown. Drain. Heat drippings, sprinkle in 2 tablespoons flour, allowing flour to brown, but not burn. Slowly pour in broth, stirring until sauce thickens. Serve over chicken or pass as an accompaniment. MRS GERALD GLASS (JANE) MARVELL, AR From the book 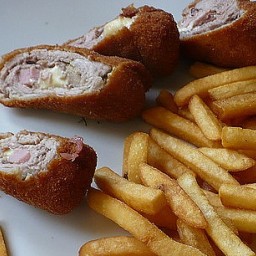