Try this Chicken Cordon Bleu Casserole recipe, or contribute your own.

Roughly chop the ham. Butter a baking dish. I like to hold onto a stick of butter with the wrapper, but if you like to get your hands greasy, that’s alright, too. Place the shredded or diced chicken in the bottom of the pan. Put the chopped ham on top. Place the sliced cheese on top of the ham.

Now make the white sauce: Melt the butter in a saucepan over medium heat. Whisk in the flour and cook until bubbly and smooth. Slowly add the milk. Cook until thickened. Add the lemon juice, mustard, salt, paprika and white pepper. Bring up to a boil and remove from heat. 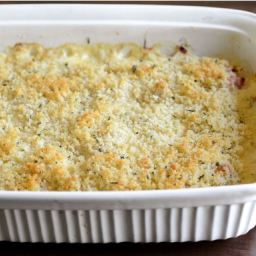 skkremer
The family loved it! I used raw chicken and not pre- cooked and it turned out great. Also used Italian breadcrumbs.
6m
Reply
Reply

brandonsmith6
This is really, really good. I didn't have mustard (not a fan) and it came out excellent without it or any substitute. I made it for meal prep. Directions are a little unclear. I think I had it in the oven about 25 minutes
1y
Reply
Reply