Try this Chicken Empanadas recipe, or contribute your own.

Preheat the fryer. Season the chicken with salt and pepper. Place the chicken in a shallow saucepan, over medium heat. Add the onions and bay leaf. Cover with water. Bring the liquid to a boil, reduce the heat to medium low and simmer for about 15 minutes or until tender. Remove and discard the liquid. Cool the chicken. In a small saute pan, over medium heat, melt 1 tablespoon of the butter. Stir in 1 tablespoon of the flour and cook for 1 minute. Whisk in the 1 cup of the milk. Season with salt and pepper. Cook until the mixture thickens, about 4 minutes. Remove from the heat and cool. Dice the chicken into small pieces. In a food processor, fitted with a metal blade, add the diced chicken, minced onions, garlic, green onions and parsley. Process until the mixture is mixed well. Add enough of the milk sauce until the mixture is smooth and creamy. Season with hot sauce, salt and pepper. Set aside. Sift the remaining 3 cups flour, salt, and baking powder into a mixing bowl. Cut in the lard unit it resembles coarse meal. In a small bowl, beat the egg with the remaining 3/4 cup milk. Gradually add the egg mixture to the flour mixture, working it to make a thick dough. Divide the dough into 24 equal portions. On a lightly floured surface, roll the dough pieces into thin rounds, about 3 inches in diameter. Put about 1 tablespoon of the mixture in the center of each round, fold over and crimp the edges with a fork. Heat the shortening a deep pot or an electric deep-fryer to 360 degrees F. Fry the pies, 2 to 3 at a time, until golden brown. Drain on paper towels and serve immediately. Yield: 24 hand pies Recipe by: EMERIL LIVE SHOW #EMIC10 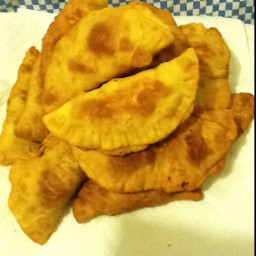 claudettem.keirstead
Great recipes, and I looked at soo many for empanadas. All of the recipes I looked at were oven baked and I wanted deep fried, and they all had ready made pie crust instead of a recipe for the pastry. This is a great authentic Puerto Rican ,Dominican style recipe, but I need some practice making good light pastry, but I will keep trying.
8y
Reply
Reply