This braised chicken dish is based on a recipe we got from home cook Olga Kolozy.

Bring an 8-qt. pot of salted water to a boil. In a bowl, whisk 2 cups of flour and 1 tsp. salt; form a well in the center. Add egg and 1/2 cup water to well; stir to form a dough. Knead in bowl until smooth, about 1 minute. Using a teaspoon, scoop walnut-size portions of dough into pot. Boil dumplings until tender, 6-8 minutes. Drain dumplings and rinse in cold water; cover with a tea towel and set aside.

Meanwhile, season chicken with salt and pepper. Put 1/2 cup flour on a plate; dredge chicken; shake off excess. Heat oil in a 6-qt. Dutch oven over medium-high heat. Cook chicken, turning once, until brown, 8-10 minutes. Set chicken aside. Add paprika and half the peppers, along with the tomatoes and onions, to pot; cook, stirring, until onions are soft, about 5 minutes. Add chicken and broth; boil. Reduce heat to medium-low and simmer, covered, turning chicken once, until fully cooked, 12-15 minutes. In a small bowl, whisk together 2 tbsp. flour and sour cream; whisk in 3/4 cup of sauce from pot. Stir sour cream mixture into sauce in pot. Remove from heat. Melt butter in a 12" skillet over medium-high heat, add dumplings and parsley, and cook, tossing occasionally, until hot, about 2 minutes. Serve chicken garnished with remaining peppers and dumplings on the side. 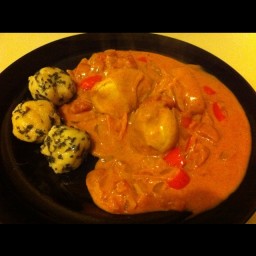 dwilson8611
Great recipe! It's almost identical to my mom's "famous" recipe. I added more garlic and sliced the veggies into larger pieces. I also omitted the tomatoes. I put the paprika into the mixture instead of cooking in it afterwards.
4y
Reply
Reply

KohnCooks
Delicious. Will definitely make again. Could you some other flavor too though, I'm not a very experienced cook so I'm not exactly sure what. Maybe another pepper or something! Still great though.
9y
Reply
Reply